For the 2nd time, Kid Peña sworn in as acting mayor 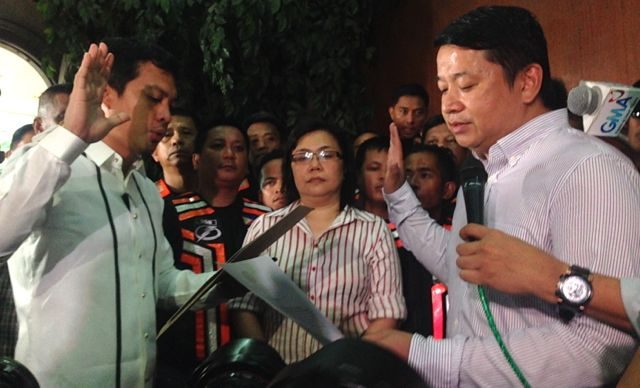 Facebook Twitter Copy URL
Copied
Makati Vice Mayor Romulo Peña is sworn in as hundreds mass at the city hall quadrangle in support of Junjun Binay, who continues to defy his suspension order

MANILA, Philippines (UPDATED) – For the second time this year, Makati Vice Mayor Romulo Peña took over as acting mayor a day after the Ombudsman again suspended Makati Mayor Jejomar Erwin Binay Jr and 14 others over another controversial city building.

Peña was sworn in past 9 am on Tuesday, June 30, at the old city hall building in the presence of assistant city prosecutor Julius Caesar Gaurano, as hundreds of Binay’s supporters continued to mass at the city hall quadrangle surrounded by police.

Peña appealed to Binay and his supporters to “set a good example” and avoid inflaming tensions.

“Nakikiusap kami na pagbigyan ang rule of law (We are appealing to them to give way to the rule of law),” he said.

Binay’s supporters earlier clashed with police amid reports that the Department of the Interior and Local Goverment (DILG) was set to serve the suspension order issued by the Ombudsman the day before.

At least 8 people were injured after some supporters threw chairs and bottled water at police, who were deployed outside the barricaded entrance of the city hall building.

Many city hall employees, wearing red, were also visibly frustrated after police stopped them from entering the city hall even when they showed their IDs.

The Supreme Court, in an advisory posted on its Twitter account, said a temporary off site will be arranged for staff of Makati trial courts.

City hall has been on lockdown since Monday, when the Ombudsman issued its second suspension order against the mayor and 14 others over the alleged overpriced Makati Science High School Building.

The DILG posted the suspension order outside the entrance of the city hall past 8 am on Tuesday.

A defiant Binay earlier said that he will not abide by the new suspension order against him, claiming that it was part of a demolition job instigated by their family’s political enemies.

The Ombudsman has also said that despite efforts to personally serve the suspension order on Monday, the mayor refused to receive it.

Binay said his lawyers are once again contesting the suspension order before the Court of Appeals – a repeat of his move in March, when he was slapped with his first suspension over another controversial Makati city building.

This is also the second time that Peña was sworn in as acting mayor following Binay’s suspension.

With another leadership standoff looming, Peña gave assurances that benefits and government services will continue for Makati residents, even as work in the city hall was disrupted due to the lockdown.

He also promised to serve as a fair and honest acting mayor.