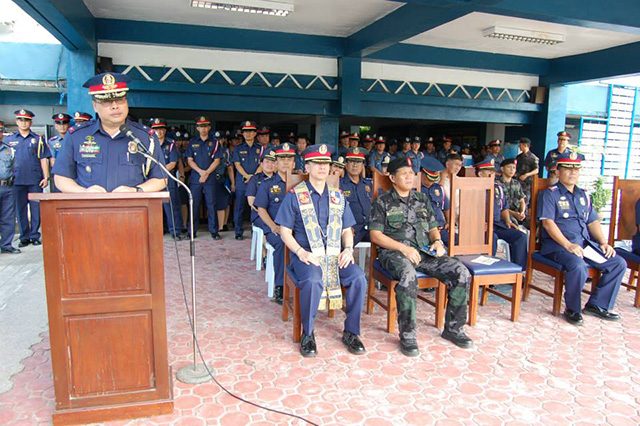 Facebook Twitter Copy URL
Copied
Dismissed Chief Superintendent Raul Petrasanta’s camp accuses a ‘power bloc’ in Malacañang of mounting a demolition job against him, supposedly because of his refusal to meddle in the 2016 elections

MANILA, Philippines – Blame it on politics and a Malacañang “power bloc” hell-bent on fixing the 2016 elections.

Chief Superintendent Raul Petrasanta, dismissed by the Ombudsman over his alleged involvement in an anomalous deal between a courier company and the Philippine National Police (PNP)’s Firearms and Explosives Office (FEO), broke his silence on Wednesday, July 1, in a statement issued by his lawyer Alex Avisado Jr.

Avisado questioned the release of the Ombudsman’s ruling, saying it was “obviously designed to derail his appointment as the next Chief PNP.”

Petrasanta was ordered dismissed by the Ombudsman on Tuesday, June 30, along with resigned PNP chief Director General Alan Purisima and 10 other officials, over a deal between PNP FEO and courier service Werfast. The order may still be appealed but is immediately executory.

The order was officially received by PNP officer-in-charge Deputy Director General Leoanardo Espina on July 1. The PNP, through Espina, has 5 days to implement the dismissal order.

Petrasanta, a graduate of the Philippine Military Academy Class of 1984, has close ties to the family of President Benigno Aquino III. He was a member of the Presidential Security Group when Aquino’s mother, the late Corazon Aquino, was president.

His close ties to the first family is the main reason why Petrasanta has been called by many a “PNP chief-in-waiting.” But his dismissal from service doused his hopes of being the PNP’s top cop.

The President is expected to appoint the new PNP chief soon.

Petrasanta’s camp, citing information from Coalition of Filipino Consumers secretary-general Perfecto Tagalog, said a “power bloc” in Malacañang had “long orchestrated a demolition job” against Petrasanta allegedly because the police general refused “to give in to the demands of a powerful group working to ensure victory in the coming elections.”

Neither the lawyer nor Petrasanta elaborated on who was the so-called “power bloc.” The President, the statement said, did not know of the plans of the “power bloc.”

On Wednesday, however, a furious Ombudsman Conchita Carpio-Morales denied allegations of “selective justice,” insisting that her office is independent. (READ: Impeach me, Ombudsman dares critics)

Werfast was tapped by the PNP FEO in May 2011 to deliver renewed firearms licenses. The Ombudsman noted that the deal, signed when the FEO was headed by Chief Superintendent Napoleon Estilles, was done “even without any procurement, accreditation and qualification process.”

The Ombudsman pinpointed Petrasanta’s supposed liability in the case – he headed the technical working group (TWG) that recommended Werfast be solely responsible for the courier system; and he was also part of the FEO Courier Services Accreditation Board (FEO CSAB) which eventually accredited Werfast.

Speaking to Rappler on Wednesday, Avisado insisted that his client “was not in favor” of the Werfast deal to begin it.

The police general insisted that Werfast’s deal with the FEO be conditional, and gave the company a year to complete all documentary requirements. The PNP eventually ended its deal with Werfast in March 2014. Avisado said it was Purisima who had ordered that Werfast delivery be made compulsory, through a memorandum issued by retired Director Gil Meneses, then chief of the Civil Security Group (CSG) which oversees the FEO.

Mounting complaints from gun owners – over delayed and even non-existent deliveries – pushed Petrasanta to eventually cancel the deal with Werfast. But this never happened, Avisado said, because Petrasanta was “unceremoniously relieved” from his position by Purisima.

He also questioned the Ombudsman’s findings that it was Petrasanta, as TWG head, who had recommended that Werfast be given the sole responsibility for the courier services. Avisado pointed out that the memorandum issued by Petrasanta, in fact, explicitly stated that the use of Werfast’s services be made optional.

“He tried to put everything in order, in accordance [with what is legal] pero binabraso sila sa baba [he was being coerced],” said Avisado.

Meneses and Purisima should be the ones held accountable for the deal because it was under “strict orders… from the chief PNP” that the use of Werfast be made mandatory, the lawyer added.

Avisado also questioned why the Ombudsman made public their decision to dismiss Petrasanta and other officials, pointing out that these orders are usually kept confidential. – Rappler.com