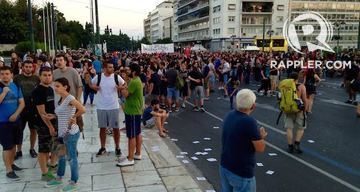 On Wednesday afternoon, July 1 Greece time, reports said that in a seeming turnaround, Greek Prime Minister Alexis Tsipras had agreed to most of the conditions imposed by the International Monetary Fund (IMF) and other creditors. The Financial Times, which obtained a copy of a two-page letter sent Tuesday night by Tsipras to the heads of the IMF, the European Commission, and the European Central Bank, reported that Tsipras still sought some amendments to the terms imposed by creditors. These included delays in defense spending cuts, more gradual pension reforms, and a 30%-discount on Value Added Tax for remote islands. Tsipras is caught between keeping his promise and making Greece still a part of the EU since an exit could mean withdrawn support from Europe. How Greece will pay its €1.5 billion ($1.7 billion) debt, support its ageing population, and keep political promises earlier made by its Syriza-led government form part of the Greek dilemma.