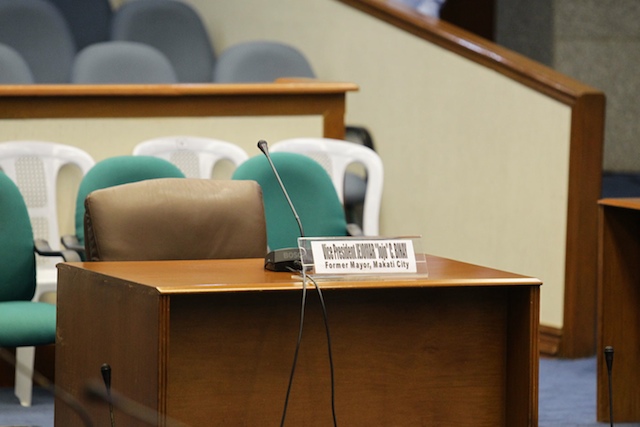 That’s the question of members of the Senate gallery as a seat bearing his nameplate was empty at the start of the 22nd Senate hearing on corruption allegations against the Vice President and his family on Tuesday, July 7.

“We have given him enough opportunities to be here. I am convinced he is not coming,” Pimentel said.

The Office of the Vice President sent a media advisory showing that the opposition standard-bearer was campaigning in Pangasinan. Binay’s office said he was “talking with local leaders and residents” of Dasol and Burgos, Pangasinan, and turning over wheelchairs to senior citizens.

Binay continued to be absent from the hearings even after he resigned from the Aquino Cabinet, and no longer has functions as housing czar and presidential adviser on overseas Filipino workers’ concerns.

While in Pangasinan, Binay scoffed at the Senate hearing. “God bless them. What? Bawal ba akong nandito? (Am I not allowed to be here?)”

Binay said he did not receive any invitation from the Senate. “Matatawa ka lang. Drama na ‘yun. (You will just find it funny. All drama.)”

Ahead of the hearing, Binay’s daughter, Senator Nancy Binay, already said her father was deliberately snubbing the probe.

Pimentel had invited Binay to the probe, saying it was his “final chance” to confront mounting corruption charges against him. Pimentel’s panel released a report recommending plunder charges against the former Makati mayor.

This is not the first time Binay snubbed an invitation from the Senate.

The Senate is investigating various corruption allegations against the Binay dynasty including allegedly overpriced infrastructure projects, the use of dummies, rigged bids, and the purchase of a vast estate in Batangas.

Binay repeatedly dismissed the probe as a ploy to jeopardize his candidacy. Analysts said the Vice President’s refusal to confront the corruption charges brought down his popularity in the June election surveys.

The Vice President was first to declare his presidential bid but corruption allegations and multiple plunder complaints weigh down his candidacy. – Rappler.com