Facebook Twitter Copy URL
Copied
Should the next military chief come from the Air Force or the Army?

MANILA, Philippines – Who will President Benigno Aquino III appoint as the next chief of staff of the 120,000-strong Armed Forces of the Philippines (AFP)?

“He’s considering others, but it’s really basically the two,” the source said.

The change of command and turnover ceremony is scheduled on Friday, July 10, or a day before AFP chief General Gregorio Catapang Jr of the Philippine Military Class (PMA) 1981 reaches the mandatory retirement age of 56.

Delgado and Iriberri are members of the PMA classes of 1982 and 1983, respectively. The two classes have been battling for top military posts since most of PMA ’81 bowed out of the military. (READ: PMA ’81: The class that rules the Philippines)

Young officers supporting so-called dark horse candidates have presented arguments against the appointment of either Delgado and Iriberri: The two generals are both retiring before the May 2016 presidential elections.

Delgado and Iriberri will reach their retirement age at the height of the campaign period. Delgado will turn 56 in March 2016; Iriberri, in April 2016.

The President usually interviews contenders to top military posts before he makes an appointment. But as of Tuesday, July 7, no advice was sent to them.

Defense Secretary Voltaire Gazmin, who is known to have a huge influence on Aquino’s military appointments, is at The Hague to join government officials in a show of force at the oral arguments on the country’s case against China.

Aquino has known Delgado since he was a young presidential son.

Delgado was a member of the Presidential Security Group (PSG) that battled coup attempts against Aquino’s mother, the late President Corazon Aquino. A PSG stint in the Cory Aquino years is a common denominator among many Aquino appointees in the security sector. 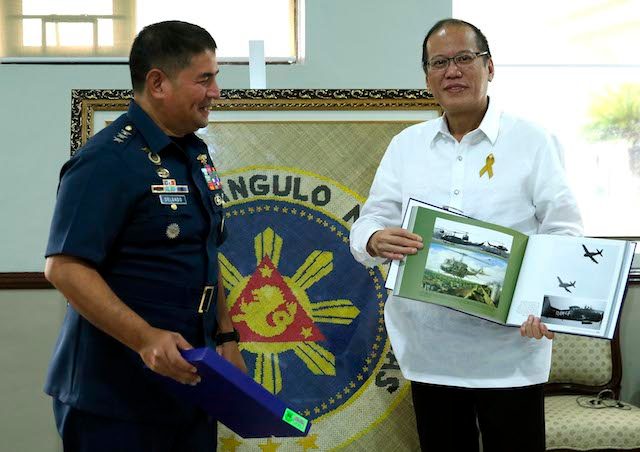 After winning the presidency in 2010, Aquino brought Delgado to Malacañang as his senior military assistant. He later climbed his way up in the military hierarchy to become the commanding general of the Philippine Air Force (PAF).

Iriberri doesn’t enjoy the same closeness to Aquino. But he is the fair-haired boy of Defense Secretary Voltaire Gazmin, commander of the PSG during Mrs Aquino’s presidency who has served as President Aquino’s father figure.

When Gazmin became defense secretary, Iriberri became his senior miltiary adviser and spokesman before he also rose in the military hierarchy.

In his rise, Iriberri overtook generals more senior than him.

He stirred some controversy in military circles in February 2013 when he – then the commander of the 7th Infantry Division – bested his own commander at the Northern Luzon Command (Nolcom) for the Army chief post. The next chief of staff is expected to further push the shift of the Philippine military from its focus on internal security to external defense at a time that the country risks losing territories to China.

It offers an argument in favor of Delgado’s appointment especially at a time when the military is anticipating the delivery of its first two fighter jets late this year, a mark of the Air Force’s return to the supersonic age.

But the next chief of staff will also deal with the upcoming 2016 presidential polls, offering an argument in favor of Iriberri. Army officers argued the situation in Mindanao also requires an Army officer at the helm.

Still, Aquino is known to have changed his mind on his appontments at the last minute.

Visaya is Army commander in Bicol. He is a mistah (PMA classmate) of Iribberi.

Lopez is responsible for operations in the entire West Philippine Sea (South China Sea). Vivar is commander of the typhoon-battered provinces in the Visayas. They are mistahs of Delgado.

The 3 have been referred to as the “dark horse” candidates.

The retirement of the two generals during the 2016 election campaign period gave rise to the idea of the President appointing any of the 3 “dark horse” bets.

But there is an option to extend the term of the AFP chief, the route taken by then President Fidel Ramos in the case of General Arturo Enrile who reached his retirement age as the country was preparing for the APEC meeting in Subic in 1996.

The appointment ban during the election period is not applicable to this government post.

The President may also appoint a new AFP chief of staff who will serve beyond his term.

This happened in the case of former President Gloria Macapagal-Arroyo, who appointed her loyalist General Delfin Bangit in 2010 to serve beyond her term as president.

But this created problems under Aquino; Bangit was the first Arroyo appointee to be forced out of government.

Bangit initially fought to stay until his retirement age in July 2011. But he was eventually forced to retire early. He submitted his early retirement before Aquino’s inauguration on June 30, 2010. – Rappler.com