China on talks with PH: No need to drop case 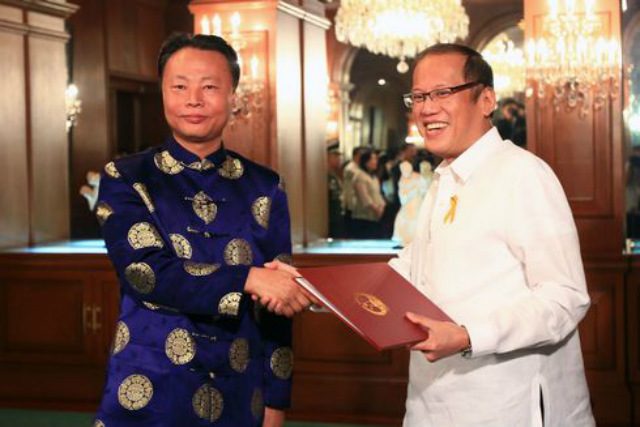 Facebook Twitter Copy URL
Copied
Chinese Ambassador Zhao Jianhua says dropping the case is not a precondition to talks but it seems 'the Philippine side itself shut the door...to secure that they have a strong position at the tribunal'

MANILA, Philippines – China is pushing for one-on-one talks with the Philippines without the need to drop the arbitration proceedings at The Hague, Netherlands, where a powerhouse Philippine team braces for another round of arguments Monday, July 13.

In a meeting with Philippine media, Chinese Ambassador to the Philippines Zhao Jianhua denied reports that China wants the Philippines to drop the case as a “precondition” for bilateral talks.

“No, there is no such precondition, because as a matter of fact, we have already announced we will not accept or participate in the arbitration. So the result of the arbitration is not binding as far as our side is concerned. This is the legal right of China,” Zhao said in an interview, the transcript of which the Chinese embassy sent to reporters Tuesday, July 7.

He stressed: “We have not used dropping of the case as a precondition for resumption of bilateral talks. It seems that the Philippine side itself shut the door…to secure that they have a strong position at the tribunal.”

Zhao pointed out that China has always tried “to reopen” its channels with the Philippines.

“But some people in the Philippines are afraid that if they open the bilateral channels, it will weaken the case of arbitration at the tribunal, because the precondition for filing the arbitration is that bilateral means have been exhausted,” the ambassador said.

“We would like to see the Philippine side to come back to the negotiation table. The door for bilateral negotiation is open and will remain open, until we come together and find a peaceful solution to those disputes,” he added.

The Philippines on Tuesday rejected China’s appeal for bilateral talks.

The Southeast Asian country, after all, asserts that it filed a case against China because it “exhausted all political and diplomatic avenues” to resolve the sea dispute.

China, on the other hand, refuses to join arbitration because it avoids third-party involvement in the issue. Instead it pushes for one-on-one talks with the countries involved.

China proposes bilateral talks “without preconditions” as the Philippines defends its case before an arbitral tribunal at the Permanent Court of Arbitration at The Hague. (READ: EXPLAINER: Philippines’ 5 arguments vs China)

Led by internationally renowned lawyer Paul Reichler, the Philippines’ lawyers want to prove that the tribunal at The Hague has the right to hear the case of the Philippines. The oral arguments run from July 7 to 13. (READ: PH lawyer vs China: ‘Giant slayer’ who defeated US)

The hearing at The Hague comes as the two countries, on June 9 this year, marked the 40th anniversary of their diplomatic ties. (READ: Aquino’s ‘Nazi’ jab spoils PH-China ties’ 40th anniv)

‘China opened door, we shut it’

The son of the late dictator Ferdinand Marcos, for his part, criticized the Aquino administration for rejecting bilateral talks. He called this “a wasted opportunity for both parties.”

“China opened the door and we shut it. The Chinese said let’s talk and we snubbed them. It’s an opportunity to resolve our differences but we failed to take advantage of it,” Senator Ferdinand Marcos Jr said in a recent media forum.

The senator’s father was the Philippine president who signed a joint communiqué on June 9, 1975, to start diplomatic relations between Manila and Beijing.

In his recent forum, Marcos added that the Philippines has nothing to lose in bilateral talks. He said this is important because of 3 things:

He also urged Chinese Filipinos to help persuade both the Philippine and Chinese governments “to at least, sit down and negotiate, or at most, resolve the problem outright.”

“We should not be snobbish. I can’t see any reason at all why we are not talking to China. On the contrary, there are more than enough obvious reasons why we should talk to superpower China,” he said, referring to the Philippines’ third biggest trading partner.

In an interview with Rappler, maritime law expert Jay Batongbacal also explained that the case against China “is not enough.” He said, “We will always go back to the two countries sitting down to talk it out.”

The Philippines earlier said it plans to resume its talks with China – but not until the tribunal at The Hague rules on the Philippines’ case likely by 2016. Dwarfed by China in terms of military strength, the Philippines would use a favorable ruling as leverage.

In a media briefing in April, Philippine Department of Foreign Affairs spokesman Charles Jose told reporters: “We really have to go back to bilateral talks. Once we have a decision by the court which is favorable, we can at least negotiate from a stronger position.” – Rappler.com