Iran agrees on roadmap for probe into past nuclear activities – IAEA

Jul 14, 2015 5:09 PM PHT
Agence France-Presse
Facebook Twitter Copy URL
Copied
International Atomic Energy Agency chief Yukiya Amano says ahead of the expected announcement of the historic deal with major powers that he aims to issue a report on the watchdog's investigation by December 15 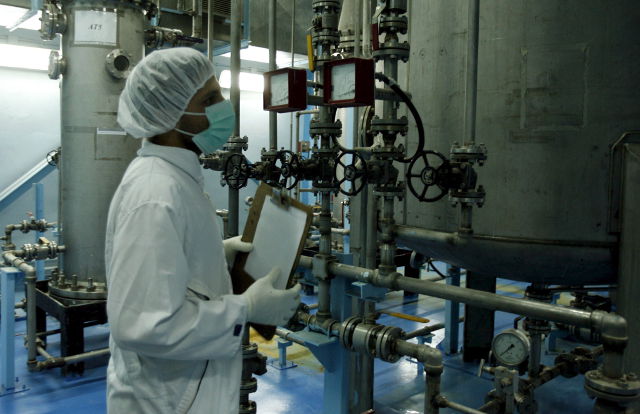 VIENNA, Austria –  The head of the UN atomic watchdog said Tuesday, July 14, that he has signed with Iran a “roadmap” for probing suspected efforts to develop nuclear weapons, a key part of an overall accord with major powers.

International Atomic Energy Agency chief Yukiya Amano said ahead of the expected announcement of the historic deal with major powers that he aims to issue a report on the watchdog’s investigation by December 15.

“I have just signed the roadmap between the Islamic republic of Iran and the IAEA for the clarification of past and present outstanding issues regarding Iran’s nuclear program,” Amano said in Vienna.

The IAEA has long sought to probe allegations that at least until 2003 Iran’s nuclear program had “possible military dimensions” – that it conducted research into making a nuclear bomb.

A particular sticking point in the probe has been the IAEA’s desire to inspect military sites where these suspicious activities may have taken place such as Parchin.

Amano said the roadmap “sets out a clear sequence of activities over the coming months, including the provision by Iran of explanations regarding outstanding issues. It provides for technical expert meetings, technical measures and discussions, as well as a separate arrangement regarding the issue of (Iranian military base) Parchin.”

“This should enable me to issue a report setting out the Agency’s final assessment of possible military dimensions to Iran’s nuclear program, for the action of the IAEA Board of Governors, by 15 December 2015,” he added.

The wider accord between six major powers and Iran expected to be announced in Vienna later Tuesday will see Iran scale down its nuclear activities in exchange for relief from painful sanctions. – Rappler.com