Jul 19, 2015 5:45 PM PHT
Rappler.com
Facebook Twitter Copy URL
Copied
(UPDATED) The Commission on Audit says the payment of P45.352 million worth of bonuses to Batangas provincial officials and employees in 2014 was 'irregular' 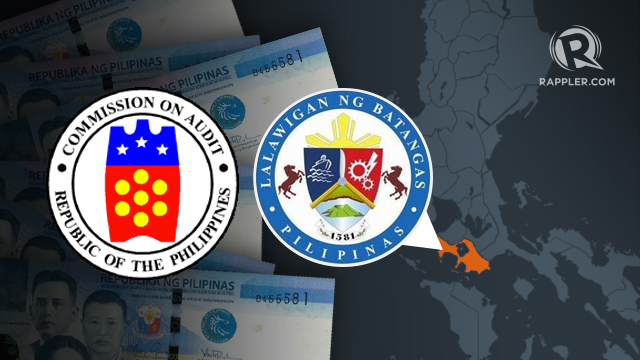 MANILA, Philippines (UPDATED) – State auditors have ordered the refund of P45.352 million worth of bonuses paid out to Batangas provincial officials and employees in 2014.

In a report released on July 9, the Commission on Audit (COA) said the payment of additional yearend bonuses was “irregular,” and was a violation of COA Circular No. 2013-003, which prohibits payment of unauthorized allowances, incentives and other benefits except those expressly provided by law.

In its report, state auditors noted that elected and appointive officials got the highest bonuses, with each employee whose salary bracket is above P15,000 receiving the amount equivalent to a full month’s pay. Employees who earn P15,000 and below per month received P15,000, while casual employees received P10,000.

COA also said that the additional bonus was granted aside from the regular mid-year bonus paid in May 2014 and year-end bonus in November 2014.

Inquiry by state auditors showed that the basis for granting the additional bonuses was Resolution No. 458 passed by the Sangguniang Panlalawigan on December 3, 2014.

COA, however, said that a provincial board resolution was not an acceptable legal basis for granting the bonuses, as only bonuses specified under the Salary Standardization Law and under circulars from the budget department are considered valid.

The audit agency ordered Batangas Governor Vilma Santos to ensure the refund of the disbursed amount to the provincial coffers.

In a statement released on Tuesday, July 21, Batangas Vice Governor Mark Leviste said he and Governor Vilma Santos Recto “remain optimistic that the approval and granting of bonuses is legal based on the following: the Local Government Code, a budget department circular, and the 2014 ordinance passed by the provincial board.

The ordinance was duly certified by the ginance committee that there was “sufficient funds” for the bonuses and these were distributed “within the bounds of the law and in good faith,” Leviste said.

The vice governor said the provincial government has appealed this COA finding.

“Governor Vilma and I respects this process and we are working with the Commission on Audit to clear things out,” he said. – Rappler.com