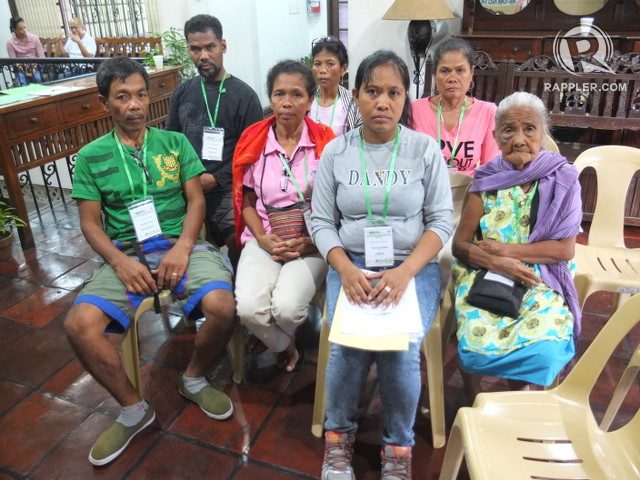 MANILA, Philippines – Groups of indigenous peoples voiced their opposition against the legacy dam projects of the Aquino administration weeks before the president’s last State of the Nation Address (SONA).

The Kaliwa Dam Project, the first part of the NCWSP, was mentioned by President Benigno Aquino III in his 4th SONA.

Aquino then said, “According to some studies, there may be a shortage of water in Metro Manila by 2021. We will not wait for a drought: The solutions that experts have studied assiduously, we have already approved – the Kaliwa Dam Project in Quezon, and the repair of the lines of Angat Dam.”

The P18.72-billion project aims to provide Metro Manila with a second source of water in preparation for increasing water demand. The megacity currently gets 90% of its water from a single source – Angat Dam in Bulacan. The Kaliwa Dam Project is under the Public-Private Partnership Program of the Aquino government. It will be built on the Kaliwa River in Pagsangahan village in General Nakar, Quezon.

The dam is set to be constructed within the ancestral domain of the Dumagat-Remontados, a 164,000-hectare area covered by a Certificate of Ancestral Domain Title (CADT) approved in 2008, said Calzado.

More than 1,400 families will be affected by the dam. The Metropolitan Waterworks and Sewerage System (MWSS), who has opened the project for bidding, assured the families that they will be relocated.

But Calzado opposes the proposal, saying relocation threatens the tribe.

(We won’t agree to the relocation because we believe that if we will be relocated, we are as good as buried in soil that we do not know. Our culture, as indigenous peoples, we cannot practice in the relocation site.)

Despite this, some members of the ethnic community agreed to MWSS’ terms, leading to the issuance of their Free, Prior and Informed Consent (FPIC) – a requirement before a project can be implemented within an ancestral domain.

But Calzado counters that the FPIC was not properly obtained and did not accurately represent the concerns of other members of the IP community.

“The proponent (MWSS) talks to some of our members but that is not the decision of the tribe. That is an individual’s decision. There is an FPIC being processed but most of us think it is not being processed correctly,” she said in Filipino.

She says members of the tribe who agreed to the dam were given access to livelihood opportunities.

Maria Clara Dullas, another Dumagat-Remontado, said the relocation site being proposed was Antipolo. She also said only certain members of the tribe were being invited to consultations about the project.

“We are not included. Only the village leaders are invited,” she said in Filipino.

IP rights expert Jennifer Tauli Corpuz thinks the Dumagat-Remontados have valid reasons for questioning the FPIC process. Corpuz, with a decade of experience in IP rights, is currently legal officer for Tebtebba, a policy research and education center for IPs.

“It’s clear that there were violations in obtaining the consent from the community. They’ve been citing incidents when their consent has been manipulated,” she told Rappler.

Some members of the tribe claim that the National Commission on Indigenous Peoples (NCIP) pass around attendance sheets and then use the sheets as proof of consent, said Corpuz.

She also said the Dumagat-Remontados were shocked by Aquino’s mention of the dam in his previous SONA when, on the ground, the process of obtaining their consent was not yet completed.

Making the issue more complicated is the conflict between the ethnic group and some local governments.

The municipal government of General Nakar in Quezon, for instance, does not recognize the CADT of the Dumagat-Remontados, said Corpuz.

The fact that only certain groups were consulted before the issuance of an FPIC compromises the integrity of the process of obtaining the tribe’s consent, she added.

“The problem here is that communities are supposed to be making decisions by consensus. It disrupts that consensus process. If you pick and choose the community members who are likely to agree to the dam and give them incentives that’s very divisive, that’s very anti-community.”

The Kaliwa Dam Project is scheduled for construction from 2015 to 2020. It will stand 60 meters high and will hold 600 million liters of water per day (MLD).

Its reservoir area will occupy 113 hectares, with an additional 28 kilometers for tunnels and aqueducts.

The MWSS just reopened the bidding for the Kaliwa Dam, according to a PhilStar report. The first batch of interested companies, which include San Miguel Corporation and Megawide Construction Corporation, were disqualified.

Interested companies are given until September 16 to complete their pre-qualification documents.

The Kaliwa Dam Project is only the first of the NCSWP. The second will be the construction of the much larger Laiban Dam, this time on the part of Kaliwa River that reaches Laiban village in Tanay, Rizal.

Aside from storing 1,800 million liters of water per day, Laiban Dam will also be asource of hydropower, generating 49.50 megawatts.

The two dams of the NCSWP aim to provide water security for Metro Manila and surrounding provinces, according to MWSS. – Rappler.com