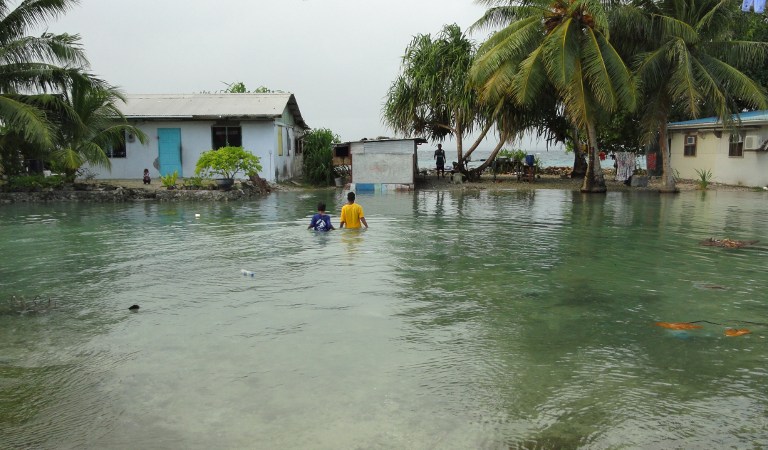 In a pledge to be officially filed with the UN next week, the sparsely populated cluster of Pacific atolls becomes the first small island nation to submit a carbon-cutting pledge ahead of a year-end conference in Paris tasked with producing a world climate pact.

It is also among the first developing country to commit to lowering – rather than merely slowing – the growth of CO2 output.

“We will reduce emissions by 32% below 2010 levels by 2025,” Foreign Minister Tony de Brum told Agence France-Presse.

In the overall effort to curb global warming, these are symbolic numbers.

The Marshalls, with only 68,000 inhabitants and virtually no industry, accounts for an infinitesimal percentage of the planet’s carbon pollution.

At the same time, climate change is a life-and-death issue for dozens of small island nations and underdeveloped countries, especially in Africa.

“As a people and a nation, our very survival is absolutely threatened by the effects of climate change,” de Brum said ahead of a 45-nation climate meeting of foreign and environment ministers starting in Paris on Monday.

“We want to make sure that the voice of the most vulnerable is heard in the process and taken seriously.”

The low-lying Marshall Islands has been devastated in recent years by storm surges amplified by sea level rise as well as severe drought – impacts scientists say are consistent with climate change.

As a members of the Alliance of Small Island States (AOSIS), The Marshalls want the global temperature rise to be capped at 1.5ºC (2.7ºF) above pre-Industrial Revolution levels, rather than the 2.0ºC threshold embraced by the 195-nation UN Framework Convention on Climate Change (UNFCCC).

The Paris agreement will be supported by a roster of voluntary national CO2-reduction pledges, but commitments submitted so far suggest that even the less ambitious goal is in doubt.

“With most of the big emitters’ targets now on the table, everyone knows we are falling well short,” de Brum said.

“Our message is simple: if one of the world’s smallest, poorest and most geographically isolated countries can do it, so can you.”

China, the United States, the European Union and Japan – which together account for more than half of global CO2 emissions – have already published their targets.

Projected sea-level rise and enhanced storm surges, even under optimistic greenhouse gas emission scenarios, may force the inhabitants of some island nations to relocate before the end of the century. – Rappler.com