In contra-SONAs, Abante and Lagman call out Duterte over missing pandemic plan 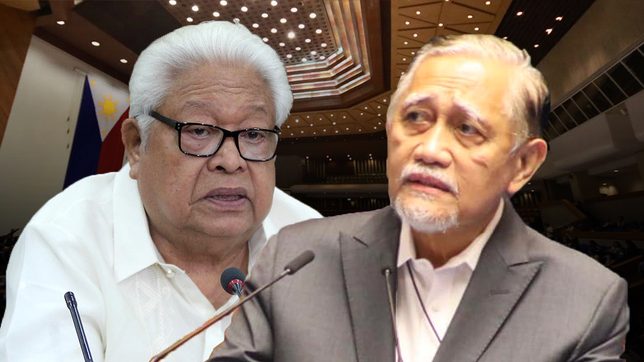 For the first time under Rodrigo Duterte’s presidency, the two contra speeches to his State of the Nation Address (SONA) in the House were united in slamming him over his failure to articulate a clear plan to fight the coronavirus pandemic.

Traditionally, the contra-SONA is delivered by the minority leader as a reaction to the President’s speech. The minority leader is presumed to be the opposition leader in the House, but this has not always been the case.

Lagman has been making his own contra-SONA speeches under the Duterte presidency as he had accused Abante and the latter’s predecessor, then Quezon 3rd District representative Danilo Suarez, of being minority leaders subservient to the majority bloc.

Abante: ‘Where is the plan?’

Abante spoke first and questioned the lack of a concrete COVID-19 response roadmap in Duterte’s fifth SONA, where the President lashed out at oligarchs instead of focusing on the ongoing pandemic.

The minority leader noted Duterte mentioned COVID-19 10 times during his SONA, which he believes means the pandemic “hangs heavy on the mind” of the President. (READ: Quick point-by-point summary of Duterte’s SONA 2020)

Yet the Manila 6th District congressman also said the President failed to expound how his administration plans to stop COVID-19 cases from rising. To date, close to 84,000 have already been infected with COVID-19.

“Some of them have felt the crushing pain of losing someone to this disease…. All of them are asking: what will the government do to protect us from this invisible enemy? What is the country’s comprehensive plan to beat COVID-19?” asked Abante.

The House minority leader argued the Duterte government should have a “comprehensive” and “coherent” plan against COVID-19.

“Simply put: if we fail to plan properly, our plan will undoubtedly fail. We need a comprehensive, coherent strategy to beat COVID-19 – one that is not dependent on the development of a COVID-19 vaccine, the mass production of which may be months away,” Abante said.

He argued the lack of a clear plan was precisely the reason why thousands of locally stranded individuals found themselves stuck together at the Rizal Memorial Sports Complex – further putting them at risk of getting COVID-19.

(This is what we’re saying: We may have good intentions, but if we do not plan well…we will not be effective. We might end up making the situation worse.)

Abante’s contra-SONA was an improvement from his speech in July 2019, back when he was still a freshly minted minority leader. Abante had barely criticized Duterte then.

This year, the minority leader praised Duterte’s renewed call for departments to go digital, especially now that agencies are left with no choice but to resort to teleconferencing and paperless transactions to avoid COVID-19 infection.

But Abante also questioned why a pandemic had to happen for the government to take the digital shift seriously.

“It is a shame that it has come to this – that we need a pandemic to force government offices to do what should have been planned for and executed a long time ago,” Abante said.

The minority leader then said the President’s anger at telecommunication companies PLDT-Smart and Globe Telecom are not misplaced, though Abante believes the National Telecommunications Commission (NTC) is ultimately at fault for poor internet speeds in the country.

“The NTC has repeatedly failed in its mandate to hold telcos accountable for poor services,” said Abante, who reiterated his call to abolish the NTC and transfer its powers to the Department of Information and Communications Technology instead.

“Will we wait for the next pandemic before we look into these serious allegations? How many billions of pesos’ worth of members’ contributions must be lost to graft before government takes action?” Abante asked.

Still, Abante said his speech is meant to be a constructive criticism of the Duterte government to help it succeed in its fight against COVID-19.

“Ang kailangan natin sa panahon na ito ay higit pa sa isang kontra-SONA; kailangan natin ng isang constructive SONA. (What we need at this time is more than a contra-SONA; we need a constructive SONA.) We need to help the administration because if it succeeds in its efforts to contain COVID-19 and address the adverse effects of the outbreak on our economy, lives and livelihoods will be saved,” he said

Like in his past 4 contra-SONAs, Lagman’s speech on Tuesday was comprehensively critical of the Duterte government’s overall response to the pandemic – from the “measly” mass testing of Filipinos to the militaristic approach to battling a health crisis.

The veteran opposition congressman said Duterte is in “gross default” for telling the public to trust the government when the President can’t even provide an anti-COVID-19 masterplan.

“The President has failed the people’s expectation. He is in gross default,” Lagman said.

“After the President’s drumbeaters announced that he would disclose and discuss his administration’s roadmap in response to the COVID-19 pandemic, the President’s SONA miserably failed to even outline the purported masterplan,” Lagman added.

For the Albay lawmaker, the closest thing to a COVID-19 roadmap in the SONA was Duterte’s endorsement of the proposed Bayanihan to Recover as One Act, which would provide a comprehensive list of 64 “interventions” that the executive branch is expected to undertake to combat the pandemic.

But Lagman said this will not be enough, since the Senate is proposing just P140 billion for the COVID-19 response standby fund. The amount is slightly higher in the House at P162 billion.

“However, whether it be the Senate or House version, the stimulus package under the ‘Bayanihan Act Part II’ is tragically miniscule. It cannot positively address the health emergency which is still raging, the social amelioration of affected families, wage subsidies to displaced workers, and financial relief and credit accommodation to distressed businesses,” Lagman said.

He then argued the Philippines now finds itself in a “quagmire of a mess” because Duterte had belittled the COVID-19 pandemic back in its early stages.

Lagman also said it did not help that the national government often flip-flopped on their pronouncements, including the conflicting statements on the conduct of physical and online classes as well as the alphabet soup of different quarantine levels.

“During a pandemic fueled by an extremely virulent virus, the cacophony of voices emanating from the Duterte administration can only result in even more confusion and deaths, rising infections, the continuous sinking of our economy, and growing distrust of the government,” Lagman.

It was only Lagman, however, who slammed the Duterte government for “squandering” its time and resources to shutdown media giant ABS-CBN and pass the controversial anti-terror law – all while the country is grappling with the COVID-19 pandemic.

Lagman had defended ABS-CBN during the hearings of the House committee on legislative franchises, which overwhelmingly junked the network’s franchise bid.

Lagman had also condemned the passage of the anti-terror law, describing it as a “draconian” measure designed to go after government critics, not terrorists.

The Albay congressman was also disappointed with Duterte’s 21 priority bills, as most of it have already been mentioned in the President’s past SONAs. (READ: Duterte’s fight vs oligarchs, death penalty bill to distract Congress during pandemic)

“These proposed legislations can be threshed out in the Legislative Executive Development Advisory Council which the President has not convened for a long time,” he said.

Towards the end of his speech, Lagman said the President wasted the people’s time by dedicating a good chunk of his SONA to go after oligarchs, attack opposition Senator Franklin Drilon, defend his bloody drug war, and once again insist on his pacifist view on the increased Chinese militarization of the West Philippine Sea.

“All of these extraneous meanderings cannot cover up for the President’s default in informing the nation on what exactly is his administration’s roadmap in positively and adequately responding to the novel coronavirus pandemic which still plagues the country,” Lagman said.