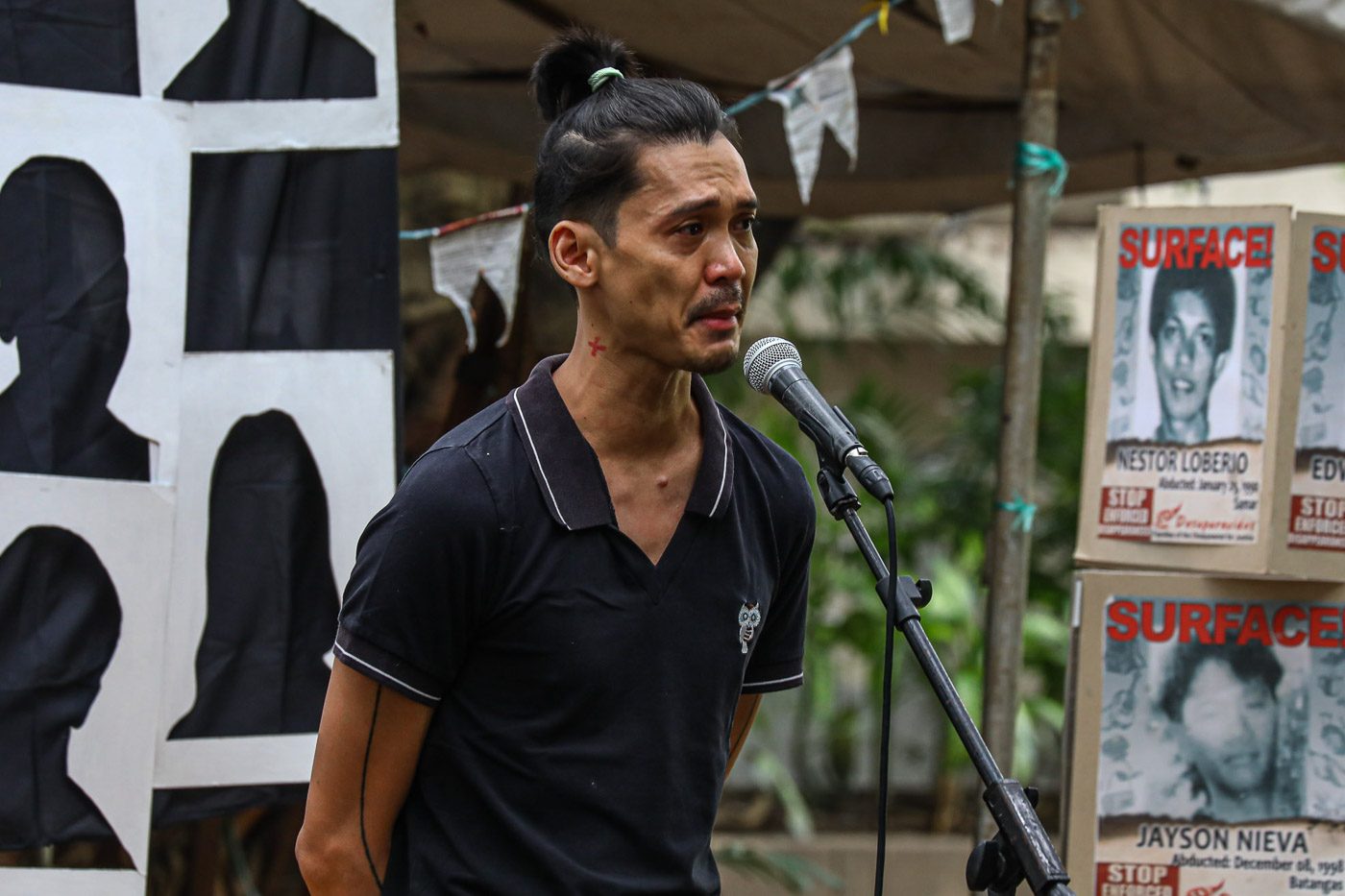 FIGHTING. Ron De Vera, son of Adora Faye de Vera, victim of enforced disappearance, speaks to honor his missing kin during a program to commemorate International Day of the Disappeared at the Bantayog ng mga Bayani in Quezon City on August 30, 2022.

MANILA, Philippines – On the International Day of the Disappeared, Adora Faye de Vera’s son, Ron, reminded the families of desaparecidos that their fight for his mother was a fight for all the political prisoners in the country.

“’Wag nating kakalimutang hindi ito laban para iisang tao lamang o dalawang tao lamang. Ang laban na ito ay para sa lahat ng bilanggong politikal (Let’s not forget that this is not a fight for one or two persons only. This fight is for all the political prisoners),” De Vera said during the commemoration event of rights groups Campaign Against the Return of the Marcoses and Martial Law, Karapatan, and Desaparecidos.

Last week, Adora was arrested by the police over alleged murder and frustrated murder charges. The Philippine National Police also alleged that Adora was a communist rebel leader in the Visayas.

In his message on Tuesday, Ron shared he was nine years old when his father Manuel disappeared – during Father’s Day of that year. They never found his father, added Ron.

Aside from his father, Ron said his mother Adora used to be desaparecido too, but was later surfaced. During the dictatorial regime of the late Ferdinand E. Marcos, Adora was abused and arrested twice while incarcerated. Decades later, she was arrested again under the administration of another Marcos.

“Lahat tayo may karapatang mabuhay, hindi ganitong buhay. Walang bata ang dapat magdaan sa mga ganitong pahirap. Kuwerenta’y uno na ‘ko ngayon, ganito pa rin. Walang pagbabago (We all have the right to live, not like this life. No child should experience these struggles. I am already 41 years old but it’s still the same. No change at all),” Ron said.

Emotional Ron shared during his short speech that all he wanted was to spend time with his mom. He added if it were not for their missing loved ones, they would not be holding the Tuesday’s event.

Arrested rebel a symbol of Marcos atrocities against women dissidents (We should not be here. All I wanted was to go to a beach, that simple. I wanted to have a vacation, be with my mom. I just wanted to spend quality time, that’s it, right?)

Families and friends of desaparecidos, including rights groups, assembled at the Bantayog ng mga Bayani to commemorate the disappeared. Photos of desaparecidos were put up on the sides of the stage.

Joi Barrios’ “Litanya ng Paghahanap” was performed during the event. The poem was written to commemorate the victims of forced disappearances.

JL, Jonas’ brother, said the sudden disappearance of his brother is extremely painful for their family. Jonas was abducted on April 28, 2007, during the presidency of Gloria Macapagal Arroyo.

Charlie, a young PUP professor, is among the first victims of forced disappearances under Marcos regime. A building inside the PUP was named after him to honor his struggles.

He has been missing for over 50 years. pic.twitter.com/DiWSaFMwj0

Tess, sister of Charlie del Rosario, also commemorated his missing brother, whose whereabouts are yet to be determined decades after he went missing. Charlie, a young educator from the Philippine College of Commerce (now known as the Polytechnic University of the Philippines), was among the first victims of forced disappearances under Marcos dictatorial regime. – Rappler.com