4 arrested in Bulacan after showing solidarity with SONA 2020 protesters 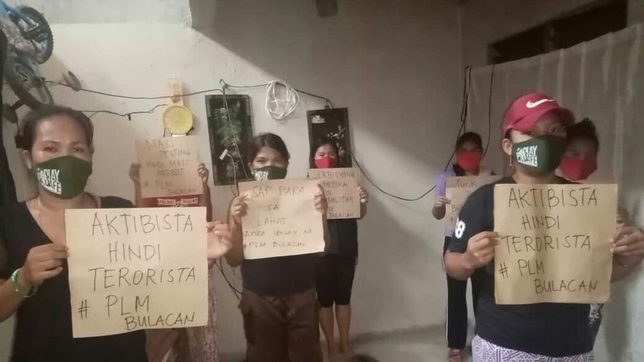 SOLIDARITY. Kadamay members in Pandi, Bulacan, take a photo of themselves to contribute to the #SONAgKAISA protest on Monday, July 27. Photo from Kadamay

Four members of urban poor group Kadamay were arrested on Monday, July 27, after they showed solidarity with State of the Nation Address (SONA) protesters from their housing unit in Barangay Cacarong, Pandi, Bulacan.

Kadamay said 7 members of the group gathered together late Monday morning inside a fellow member’s house lot and took a photo of them holding placards to contribute to the united protest action dubbed #SONAgKAISA that’s set on the same day of President Rodrigo Duterte’s SONA.

The placards called for free mass testing, coronavirus aid for all, and the release of recently arrested Kadamay member Rose Fortaleza.

The group also took a photo of them doing this outside the home. They did this while wearing face masks and observing physical distancing.

Kadamay and Pandi police have conflicting statements about the incident.

While Kadamay said the group took the photos at 11 am, police claimed they saw the group of Kadamay members holding placards and holding a rally at 3 pm.

According to the police report, authorities asked the protesters if they have a permit to rally and later advised them to go home when they couldn’t present any.

The police report said that the protesters allegedly “persisted and pushed the police officers that resulted to their arrest while the other Kadamay members fled on foot in different directions.”

The police report said the arrested members were charged with resistance and obedience to a person in authority, and claimed that they violated Republic Act No. 11332 or the Mandatory Reporting of Notifiable Diseases Act.

Under Section 9 of Republic Act 11332, “non-cooperation” in a health crisis is punished. This was used by the Department of Justice (DOJ) at the start of lockdown as the legal basis to charge, and even arrest without warrant, those who violate lockdown rules.

Doringo said that the Kadamay members took the photos at 11 am, and were only arrested at 3 pm, when they were already inside their homes where they were doing chores or resting.

(It’s not true and we condemn that allegation because they took that photo opportunity at 11 am and they were visited by police at 3 pm. April Trixie was doing the laundry, and Janet was resting by then.)

( They were not seen doing the actual photo opportunity. That’s how they stitch together their made-up cases to pin down the people they arrested and detained illegally.)

Kadamay members have been the subject of a string of harassment and attacks from authorities. On Sunday morning, July 26, policemen seized bundles of progressive community magazine Pinoy Weekly from the Bulacan office of Kadamay. At 1:30 am on the same day, Kadamay member Fortaleza was arrested without a warrant. A police report said Fortaleza was walking on the side of a street in Barangay Siling Bata, Pandi, Bulacan, without a face mask. Police said she was also allegedly holding “pamphlets or propaganda…against the government.”

Kadamay, however, asserted that Fortaleza was “abducted from her home and charged with not wearing a face mask despite being indoors.”

Doringo said these are among the administration’s scare tactics in their worsening crackdown on activists. These were also seen on the day of Duterte’s SONA.

At least 64 individuals were detained by police in Cavite while on their way to a protest action at the University of the Philippines Diliman on Monday, July 27. (We can see the whole week that the police has been threatening people who want to protest on the day of the SONA…. Those who live in Pandi aren’t doing anything illegal. There’s no reason to arrest them. There’s no clear case charged against them but why are they still detained? What the PNP is doing to us every day is illegal.)

Fortaleza and the 4 Kadamay members are still detaned as of posting time. – Rappler.com