In two recent press briefings, he said this was among the findings of coronavirus task force officials as they went around Metro Manila and the nearby provinces placed under modified enhanced community quarantine from August 4 to 18.

“We saw that the most critical care areas right now are the workplace, the ones we call economic hubs, at the same time the industries,” he said on Thursday, August 6, during the launch of the One Hospital Command Center in Makati City.

“Yesterday, we saw that there are grave violations in terms of observing minimum health standards, in terms of canteens, smoking areas, that became the source of contamination. So now, that’s what we are looking at as the reason for the spikes,” he added in Filipino.

Because of this, Galvez thinks private companies should conduct “orientation” seminars for their workers to ensure better compliance with rules like mandatory mask wearing, disinfection, social distancing, and the ban on non-essential mass gatherings.

The day before, August 5, Roque told CNN Philippines’ Pinky Webb that there were no clusters of COVID-19 transmissions in workplaces.

“Who are using rapid test kits now? It’s the corporations and there’s no clusters observed in the workplaces right now,” he said.

Roque was using the claim to defend the use of rapid antibody test kits after medical societies called on the Duterte government to stop its overreliance on them.

The supposed absence of transmissions in workplaces meant that rapid tests were effective and supposedly belied the claim of doctors that reliance of private companies on rapid tests were causing the spike in infections.

However, Roque was wrong in saying that the Department of Health did not identify clusters in workplaces. In fact, out of the 887 clusters identified by the DOH as of August 3, 63 were found in workplaces, transportation, and accommodations.

“We saw that one of the sources of transmission in new cases is the workplace,” Galvez also said on August 3.

Another alarming trend that hospitals like St Luke’s and Philippine General Hospital have reported to government officials is that infections are no longer occuring by individual but by family.

The source of such multiple, simultaenous transmissions? Family reunions.

“The trend has changed. Now, the patients are not just one family but multiple families. This means the transmissions are happening in the workplace and what we call family celebrations,” Galvez said in Filipino on August 3.

“In Nueva Ecija, there were zero COVID-19 cases. Because someone invited family from Manila, there was a family reunion, 60 got contaminated,” he added.

Another source of family-wide infections is the prevalence of families who live in tiny houses. This is the case in poor communities.

To stop such transmissions, the government recently began more aggressively imposing the requirement that COVID-19 cases without their own room and bathroom have to be brought to accredited isolation facilities. 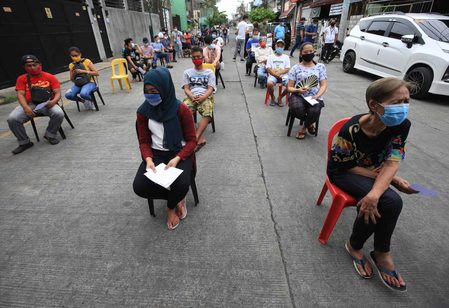 Due to unclear guidelines, hospitals were turning away mild and asymptomatic COVID-19 cases even if their homes did not allow them to properly self-isolate.

Persons with this problem should contact their barangay or other local government office in order to be brought to an isolation center.

The task force wants to devote “80%” of its efforts on prevention, which requires a “change in mindset and behavior” among citizens, said Galvez. – Rappler.com