Facebook Twitter Copy URL
Copied
'It is but right that our leaders do whatever is necessary to address this open and continuing insult to Filipinos,' says former DFA chief Albert del Rosario

In calling on Huang, Del Rosario said, the DFA acted on its constitutional duty to protect the Philippines’ “national sovereignty, territorial integrity, national interest, and the right to self-determination.”

“This is truly the ‘independent foreign policy’ contemplated by our Constitution, which is to protect our national heritage in the West Philippine Sea,” Del Rosario said on Tuesday, April 13.

The DFA earlier said it summoned Huang on Monday, April 12, after Chinese fishing ships remained in Julian Felipe Reef and other maritime areas even after weeks of repeated calls to immediately withdraw.

Huang, the DFA said, was reminded that Julian Felipe Reef is in the Philippines’ exclusive economic zone, where Filipinos enjoy sovereign rights over resources. He was told that the continuing presence of Chinese vessels around the reef is a “source of regional tension.”

The Philippines also raised the landmark 2016 Hague ruling that struck down China’s historical claims in the West Philippine Sea.

Del Rosario led the Philippines in filing its historic case against China at the Permanent Court of Arbitration in the Hague. 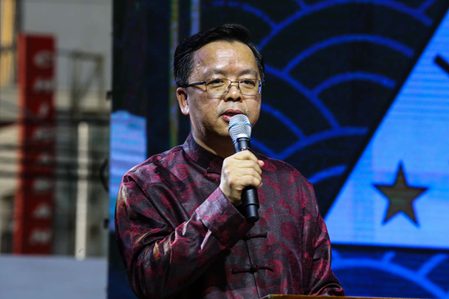 So long as Chinese vessels remain in Julian Felipe Reef, Del Rosario pointed out, they would be violating Philippine laws, including Republic Act No. 8550 or the Philippine Fisheries Code of 1998.

The law states “it shall be unlawful for any foreign person, corporation or entity to fish or operate any fishing vessel in Philippine waters.”

Huang’s summoning comes as tensions in the West Philippine Sea flare up amid a renewed push by the Philippines to publicly challenge China’s aggressive behavior in the maritime area.

Since late March, Philippine diplomatic and defense officials have demanded that China “immediately withdraw” its ships from the area, after over 200 vessels believed to be manned by Beijing’s maritime militia were first spotted massed in Julian Felipe Reef. There were also ships scattered around other areas of the Kalayaan Island Group.

China, meanwhile, insisted vessels were still in the area seeking shelter from “rough” seas. It called on the Philippines to “stop wanton hype-up, and avoid casting negative influence on bilateral relations and the overall peace and stability in the South China Sea.” – Rappler.com