The Department of Justice (DOJ) announced Thursday, March 13, that Aquino made the appointments on March 6. The NBI is an agency under the DOJ.

The newly-appointed deputy directors of the country's premier investigative agency include:

The letters sent to De Lima cited no specific reason behind the appointments, which effectively sacks two deputy directors in the bureau.

"They are presidential appointees, hence, they serve at the pleasure of the President. No need to cite a particular reason," De Lima said in a text message to reporters.

De Lima said that "each change, no matter how difficult and even painful," is "a necessary step to achieving what is best for the agency."

Mendez, a veteran field investigator and lawyer who rose from the ranks within the bureau, is the new NBI director. He took his oath before De Lima on January 16, 2014 – the same date in year 1978 when he joined the NBI as an agent.

He is described by insiders as low-key and not associated with any politician. (READ: New NBI chief: Low profile, from the field) 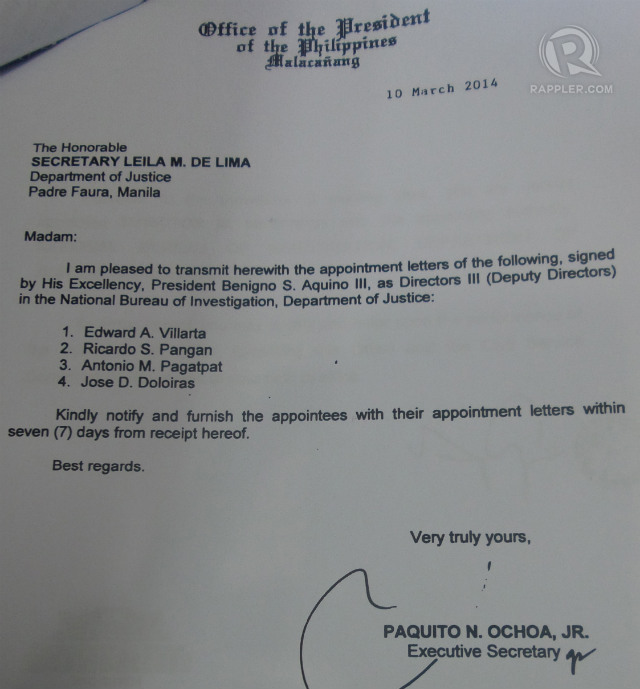 All of Aquino's new appointees have worked in government for years and come from different regional offices of the NBI.

DDFIS Villarta served as NBI regional director for 12 years and was acting officer-in-charge (OIC) in the Office of the Deputy Director for Technical Service prior to his March 6 appointment. He is 61 years old and earned his law degree from the Far Eastern University in 1977. Villarta was accorded the Outstanding Case Award for the investigation into the death of broadcaster Ted Failon's wife.

DDInvS Pangan, 64, was regional director of the NBI-Ilocos Regional Office prior to his appointment by Aquino. He also rose from the ranks, working as a patrolman from 1974 to 1978 in the Baguio City Police Department. Pangan earned his Bachelor of Laws from the Baguio Colleges Foundation in 1976 and his Criminal Justice Education from the University of Virginia in 1976.

DDFS Pagatpat, who is replacing Lasala, was a former municipal councilor in Salcedo town, Eastern Samar. He worked as a legal officer in the Department of Agriculture, but joined the NBI as an agent in 1990. He was the regional director of the NBI-Cebu Regional Office prior to being appointed by Aquino. Pagatpat is 50 years old and earned his law degree from the Divine World University in 1988.

Being an accountant, DDIntS Doloiras worked as an accounts analyst at the Department of Budget and Management. In 1988, he joined the NBI as an agent. He was given a Presidential Commendation in 1992 for solving the murder of former Ternate Mayor Octavio Velasco in Cavite province. Prior to Aquino's appointment, he was assistant regional director in Cebu with Pagatpat.

"With these 4 new appointments, in the top tier of the bureau no less, we can expect greater achievements born," De Lima said, adding that the appointment of insiders creates a "morale boost" meant to inspire the rest of the NBI. – Rappler.com