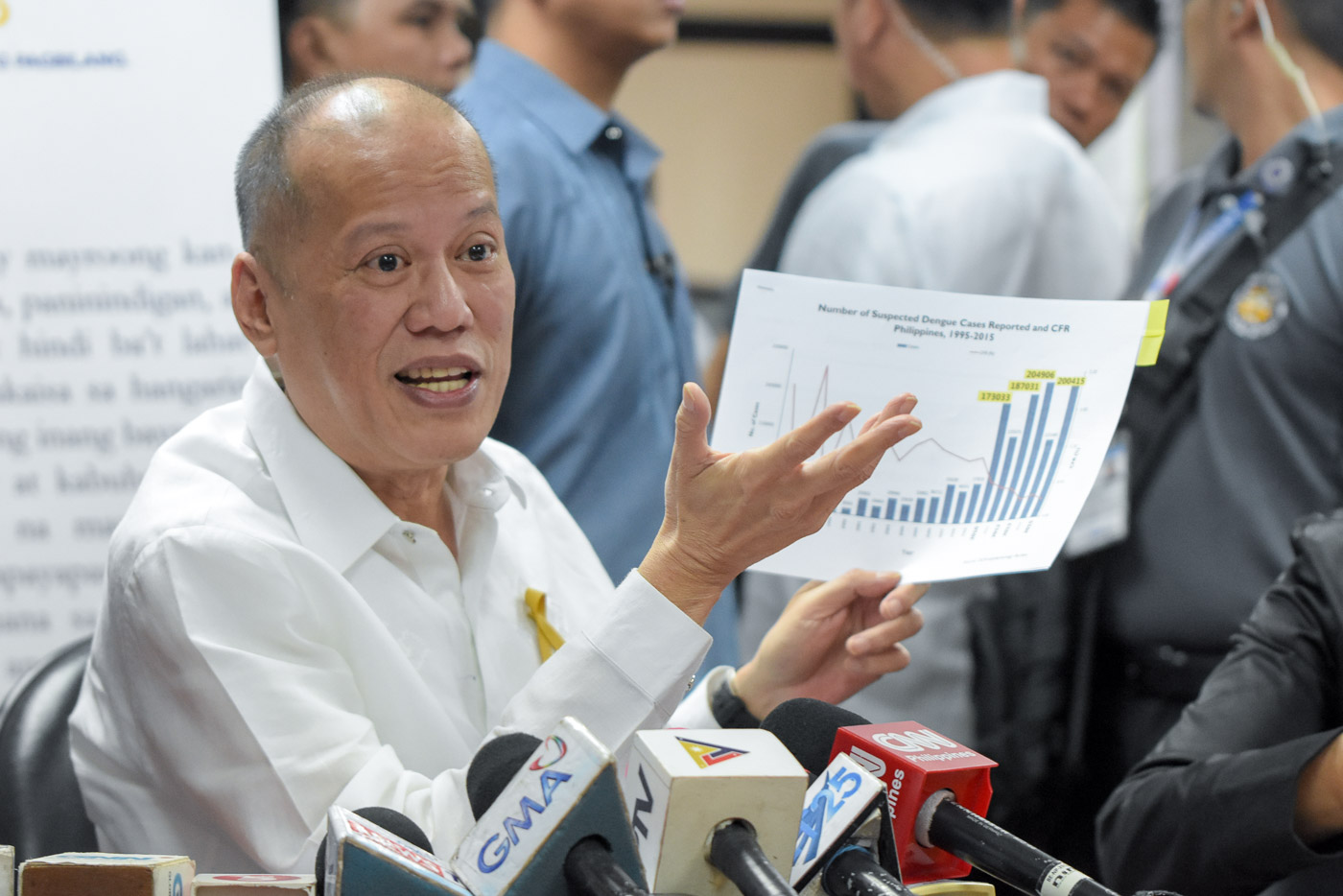 "Wala po akong ginawang mali (I did nothing wrong)," Aquino said in a press conference at the Commission on Elections (Comelec) press office on Thursday.

"Klaro naman pong harassment ang punto (It's clear that the point is harassment)," he added, saying that his accusers apparently do not seek justice but positions in government.

The former president said that the Omnibus Election Code itself would prove that he did not commit electioneering in relation to the mass immunization program, which used the controversial Dengvaxia dengue vaccine.

The law provides exemptions such as contract works which have been awarded before the election ban. Procurement processes for the mass immunization program started as early as yearend 2015 and the Department of Health, through the Philippine Children's Medical Center (PCMC), filed the purchase order for Dengvaxia on January 21, 2016.

"The job of protecting the people's health cannot be held in abeyance by elections," Aquino said.

He also said the complaint against him is anchored on "kathang isip at maling layunin (fiction and the wrong objective)."

Aquino and his former Cabinet officials faced the Comelec law department in close-door proceedings at around 10 am on Thursday.

The complaints against them were filed by Doctors Francis Cruz and Clarito Cairo Jr, as well as the Volunteers Against Crime and Corruption.

Complainants accuse Aquino and other former officials of releasing and using public funds, the money allegedly for Dengvaxia, for the 2016 election campaign.

Below is an excerpt from the complaint filed by Cruz and VACC:

Aquino III, Abad, and Garin had caused the releases, disbursements or expenditures of over three billion five hundred thousand pesos in public funds in connection with the procurement of the Dengvaxia vaccine and implementation of the School-Based Immunization of Tetravalent Dengue Vaccine of the Department of Health (or Dengue Immunization Program) in the National Capital Region (NCR), Calabarzon and Central Luzon during forty-five days before the May 2016 elections, contrary to sec. 261 (v), B.P. Blg. 881, otherwise known as the 'Omnibus Election Code.'

In the case of other DOH officials, they are liable for being involved, directly or indirectly, in the first round of implementation of the Dengue Immunization Program on April 4, 2016, or during the election ban.

The said humongous public funds were used for any election campaign or for any partisan political activity, as no less than Aquino III, the leader of the Liberal Party, together with some DOH officials, took part during the launching of the Dengue Immunization Program of the DOH in order to further the candidacies of his partymates, especially those vying for the presidential, vice-presidential and senatorial post, or otherwise influence or entice the voters to throw their support or vote for the candidates for president, vice-president and senator of his party in the May 2016 elections, contrary to sec. 261 (o) of said law.

The Volunteers Against Crime and Corruption (VACC) and its witness, physician Francis Cruz, lodged the complaint against Aquino and others over the Dengvaxia mess on February 2. – Rappler.com

Paterno R. Esmaquel II is a senior reporter leading Rappler’s coverage of religion and foreign affairs. He finished MA Journalism in Ateneo and MSc Asian Studies (Religions in Plural Societies) at RSIS, Singapore. For story ideas or feedback, email him at pat.esmaquel@rappler.com.