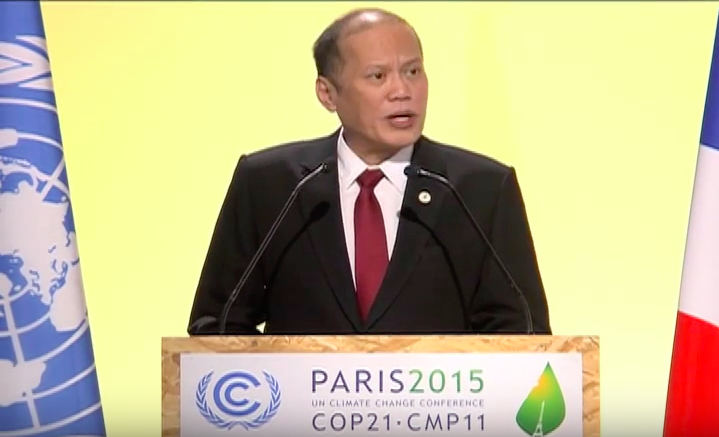 COP21 LEADERS' EVENT. Philippine President Benigno Aquino III joins about 150 other world leaders at the opening of the climate conference in Paris, France on November 30, 2015.

PARIS, France – Philippine President Benigno Aquino III stood up for countries most vulnerable to climate change, urging about 150 world leaders to support a fair agreement at the end of the much-awaited summit here.

At the Leaders’ Event of COP21 or the 21st Conference of Parties of the UN Convention Framework on Climate Change on Monday, November 30, Aquino highlighted how poor countries bear the brunt of global warming.

"It is time for a fair consensus to finally be reached. Our collective security depends on our ability to act,” Aquino said at the summit that seeks to craft the world’s action plan to combat climate change.

The Philippines has one of the smallest carbon footprints in the world, but it is among the top 10 countries with the "highest proportion of affected people over the total population,” according to the UN Office for Disaster Risk Reduction and the Centre for Research on the Epidemiology of Disasters.

"At the heart of this call is the stark reality that countries like the Philippines bear a disproportionate amount of the burden when it comes to climate change,” Aquino said.

The Philippine leader highlighted the plight of the most vulnerable countries, like the developing island state of Grenada. The country suffered damage amounting to more than 200% of its gross domestic product (GDP) in 2004.

According to Aquino, if vulnerable countries "lose so much, then their capacity to contribute in our efforts is also dramatically diminished.”

Yearly, the economic costs of climate change amount to at least $44.9 billion while more than 50,000 lives are lost in 20 vulnerable countries, Aquino added.

"I believe the real challenge begins with an accounting of capacities: How do we ask everyone to contribute, and how do we ask those with more to help out those with less?” he said.

However, while he was emphatic about the need for climate financing, Aquino did not reiterate Philippines' earlier position on calling for an "ambitious, legally-binding, and robust" deal in Paris.

He did not explicitly support the growing clamor to keep global warming below 1.5°C instead of less than 2°C, the disastrous tipping point of climate change. (READ: Aquino's Paris climate speech 'hopeful but cautious' – adviser)

They also expect the likes of the United States, China, India, and Saudi Arabia to significantly reduce their greenhouse gas emissions.

US President Barack Obama, who also attended the world leaders’ event, took responsibility for the US being the second-largest emitter, vowing to take action. (READ: Obama at COP21: 'Let's get to work' on climate)

"We know the truth that many nations have contributed little to climate change but will be the first to feel its most destructive effects,” Obama said.

The leader of the largest economy also urged his fellow heads of state to scale up clean energy initiatives globally.

"Here in Paris, let’s also make sure that these resources flow to the countries that need help preparing for the impacts of climate change that we can no longer avoid.”

Obama and other world leaders earlier launched "Mission Innovation," a multi-billion-dollar initiative that sees China, India, Saudi Arabia, and 17 other countries pledging to boost their investment in developing clean technology.

“We want to help developing countries find a credible pathway toward low carbon development,” said Jim Yong Kim, president of the World Bank Group, which worked with the 4 European countries to develop the initiative. – Rappler.com