MANILA, Philippiens - Never has a bill been as contentious as the Reproductive Health (RH) bill. Despite the pronouncements of President Benigno Aquino III supporting its approval, his own party mates in the House are divided on the issue.

The measure -- or at least its original version -- mandates government to promote contraceptives and educate Filipinos on planning their families. Proponents said the country needs this to help stem problems related to the burgeoing population. Critics slam the bill for its supposed "anti-life" spirit.

"As floor leader, I find the situation very difficult, when the minority members are only amused spectators. It is the members of the majority who are fighting each other. It's the Liberal Party members who are trying to out-maneuver each other in parliamentary tactics," Majority Floor Leader and Liberal Party member Rep Neptali Gonzales II said.

Even after the August 6 Malacañang meeting, for example, where the majority of administration allies acceded to Aquino’s “request” to terminate the debates, LP member Manila Rep Amado Bagatsing attempted to block the vote at the House plenary. It was then when he uttered his infamous quote, “Malas po ang sais. Ang sais ay numero ng demonyo.” (Number 6 is bad luck. It's the number of the devil.)

LP secretary-general Cavite Rep Joseph Emilio Abaya himself is against the RH bill, although he is not among those trying to delay the bill. LP deputy speakers Northern Samar Raul Daza (former LP President) and Zamboanga City Rep Maria Isabelle “Beng” Climaco are also against the bill.

“I am pro-life. I have my own beliefs in it. I have been an active observant in all discussions. I’m hoping there will be a middle ground,” Abaya told reporters. But he won’t comment on the current proposal to limit distribution of contraceptives to the poorest of the poor. (Abaya will soon leave his congressional post to head the Department of Transportation and Communications.)

It’s not only LP that's divided on the bill. The other political parties under the majority coalition are in the same boat, too, such as the Nacionalista Party (NP), Nationalist People’s Coalition (NPC), and National Unity Party (NUP).

Gonzales admitted that the situation calls for presidential intervention. For the RH bill to proceed, Gonzales said, "I hope" the President issues a marching order.

The RH bill was among Aquino's campaign promises although he himself softened on his position after he was attacked by members of the Catholic hierarchy. He declared it a priority bill, but did not certify it as urgent.

The bill has been languishing in the plenary until the House leadership forced a vote in August. At the last minute, Aquino threw his support behind the bill and invited House members to Malacañang to appeal to them to terminate the debates.

Despite the supposed separation of powers between Malacañang and Congress, the reality is that Philippine presidents have tremendous power over the legislative process. This is more pronounced in the House of Representatives because it is historically packed with administration allies.

"While we want to maintain our independence, we really need somebody who will arbirtrate. If it's just us, it would be difficult. This is the first time I've seen a bill divide the House to this extent. There is no demarcation between majority and minority," said Gonzales.

Aquino already intervened when he called for a meeting with House members in Malacañang before they voted to end the period of debates. The most rabid of RH bill critics – including Cebu Rep Pablo Garica – voted in favor of ending the debates. In doing so, Aquino was able to buy time to pass the RH bill.

But it was clear to the critics of the RH bill that Aquino’s request was limited to ending the period of debates. They acceded knowing the real battleground is the period of amendments. As soon as the vote was over, they declared they will inject killer amendments to the bill.

So far, the critics have been winning the war.

The House was scheduled to start the period of amendments on August 14. But critics were able to block it using parliamentary tactics. The bill won’t likely be tackled again until October, after the filing of the certificates of candidacies (COCs) for the 2013 elections.

In a move to save the bill, RH bill authors have agreed to water down the bill. The new version of the RH bill no longer “promotes” contraceptives nationwide. Instead it will be made “available” exclusively to the poorest of the poor.

Malacañang’s hand is already seen in the current moves to save the bill.

Budget Secretary Florencio "Butch" Abad, who is among Aquino’s most trusted advisers, joined Belmonte and RH bill author Albay Rep Edcel Lagman in a meeting on Sunday, September 2, to discuss how to make the bill acceptable to the Catholic Church. They agreed to form a technical working group (TWG) to draft a compromise measure.

Abaya is hoping that the TWG could come up with a middle ground "to avoid a request coming from the President." The TWG may be the better option for the critics of the RH bill. Gonzales said that if the Catholic Church remains opposed to a compromise, "the people will decide later on."

Whether President Aquino will push the RH bill further than he already has is the question. Perhaps the  ultimate measure of his support would be when he certifies it as an urgent billl. 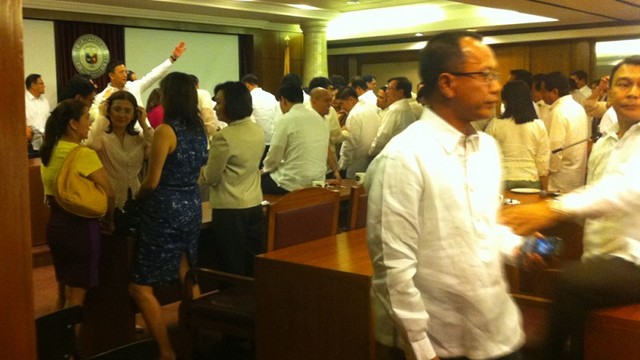 Gonzales and Abaya acknowledged that the President is very careful in giving out marching orders. Unlike other bills, the RH bill is very personal. The President cannot just ask the House members to go against their faith.

“This is not like the impeachment. There are non-political issues involved. He has been very careful. In the Liberal Party, it’s always consensual. We assess the environment… especially when you tread on non-political ground. Eventually, it boils down to the individual congressmen. How are they going to do the balancing act?” said Abaya.

Gonzales added: "It is part of their religoius belief. It's difficult to impose your will on somebody whose advocacy is to protect to the hilt his religious belief. It's tough to issue orders to [someone like that]."

The House of Representatives has temporarily shelved the RH bill to prioritize the passage of the P2.006-trillion government budget for 2013. It won't likely be tackled again until October, after the filing of certificates of candidacies for the 2013 elections.

Otherwise, the bill will go back to square one after the May 2013 elections. Unfortunately, this has been its fate for more than a decade now.- Rappler.com