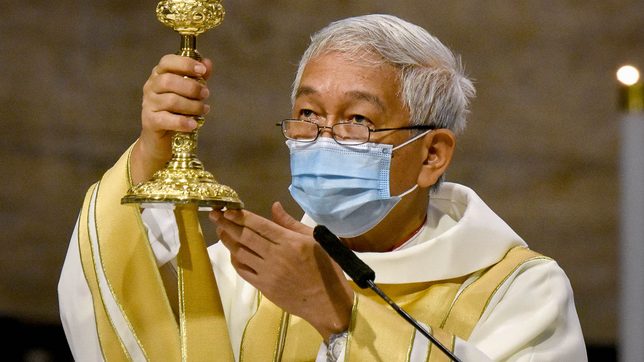 PRO-POOR. Bishop Broderick Pabillo, apostolic administrator of the Archdiocese of Manila, celebrates Mass to launch the 500th anniversary of Christianity in the Philippines at the Manila Cathedral on February 6, 2021.

Facebook Twitter Copy URL
Copied
'Let this be one of the legacies of our quincentennial celebration for the arrival of the Christian faith in our country,' says the activist Bishop Broderick Pabillo of Manila

The Archdiocese of Manila took a bold move on Thursday, March 25, and abolished fixed rates for baptisms, confirmations, and Mass intentions, giving teeth to one of the long-envisioned reforms in the Philippine Catholic Church.

The abolition of this system of fixed payments, called the arancel system, takes effect in the Archdiocese of Manila starting April 14, as the Philippines marks 500 years of Christianity in the country.

The Archdiocese of Manila covers the cities of Manila, Pasay, Makati, Mandaluyong, and San Juan.

In a decree, Bishop Broderick Pabillo of Manila said abolishing the arancel system was first envisioned by the Second Plenary Council of the Philippines (PCP II), a historic gathering of bishops, priests, religious, and laypersons aimed at reforming the Philippine Catholic Church.

The abolition, however, has not been fully implemented on a national scale since the end of PCP II in 1991. Pabillo said the Archdiocese of Manila gradually prepared programs since 2017 to abolish the arancel system, while bishops nationwide recently reiterated the call of PCP II.

“In view of the foregoing, we hereby decree that beginning April 14, 2021, there will no longer be any fixed rates for the celebration of the sacraments of baptism and confirmation and for the offering of Mass intentions in the churches in the Archdiocese of Manila. Donations, however, from the faithful for the support of their church are encouraged,” Pabillo said.

“Let this be one of the legacies of our quincentennial celebration for the arrival of the Christian faith in our country,” he added.

Pabillo, an activist bishop known for his pro-poor stance, is the temporary head or apostolic administrator of the Archdiocese of Manila as Pope Francis has not named a new archbishop.

While Pabillo can only implement this decree in the Archdiocese of Manila, other dioceses are now expected to follow suit. One of the dioceses that had already abolished the arancel system is the Archdiocese of Lingayen-Dagupan, led by Cardinal Jaime Sin’s protégé Archbishop Socrates Villegas.

Pabillo recently made headlines after he decided to defy the government’s ban on religious gatherings, as he said officials should also consult religious groups before handing down guidelines. Pabillo’s move forced the government to reconsider the church’s request. – Rappler.com