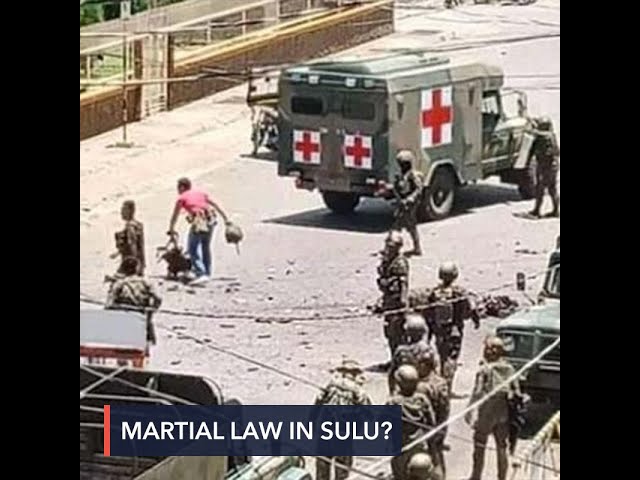 Facebook Twitter Copy URL
Copied
(UPDATED) 'With that recent incident, there are a lot of casualties. To better control the population, I think it is wise to declare it,' says Army chief Lieutenant General Cirilito Sobejana

Philippine Army chief Lieutenant General Cirilito Sobejana recommended on Tuesday, August 25, that President Rodrigo Duterte declare martial law over the province of Sulu after the twin Jolo bombings that killed at least 14 and injured at least 75.

“With that recent incident (Jolo twin bombings), there are a lot of casualties. To better control the population, I think it is wise to declare it (martial law) once more,” Sobejana said in an interview reporters, when asked about an earlier interview with DWIZ.

Asked for how long he believes military rule should last over the archipelagic province, Sobejana said it would depend on the situation, which means the military would have to further study the circumstances on the ground.

Sobejana said his recommendation has yet to be formalized through a memorandum to Secretary of National Defense Delfin Lorenzana and President Duterte.

The argument against martial law

“We have passed a strong Anti-Terrorism Law for our security forces to better address terrorism in Mindanao and the rest of the country…With all that said, another declaration of martial law in Mindanao or Sulu may not be necessary,” Lacson said.

The controversial law allows for the detention of suspected terrorists for up to 24 days without arrest warrants. That time for detention, state security forces previously argued, would be enough to build a case against suspected terrorists to seal convictions and deter terrorism. (READ: Beware of that two-faced clause in the anti-terror law)

Even Defense Secretary Delfin Lorenzana and Interior Secretary Eduardo Año had said in previous occasions that the enactment of the anti-terror law would have merited the earlier lifting of martial law in Mindanao, which lasted from May 2017 to December 2019. – Rappler.com