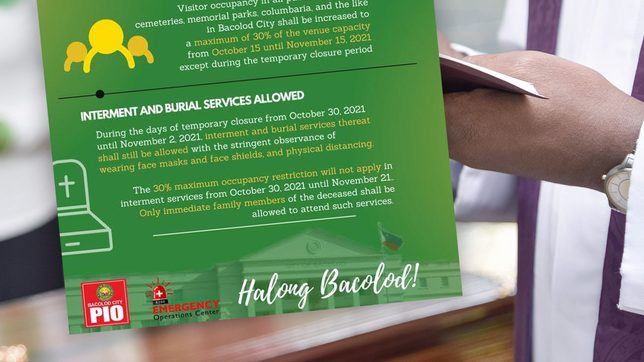 Facebook Twitter Copy URL
Copied
Priests and ministers with a single assistant each will go around cemeteries, memorial parks and columbaries to bless graves of departed residents from October 30 to November 2

Priests and ministers with a single assistant each will go around cemeteries, memorial parks and columbaries to bless graves of departed residents in Bacolod City from October 30 to November 2, Mayor Evelio Leonardia said on Thursday, October 28.

The city information office, quoting Leonardia, told Rappler that to make up for the temporary closure, the second in as many years for the Philippines,  the city has allowed 30% capacity in cemeteries and similar areas until November 15. There will also be no age restrictions during this period, although police and workers for the Emergency Operations Center will be monitoring to ensure health protocols are maintained. The Bacolod police office said cops will be deployed until November 5.

“Your city government knows that blessings for our dearly departed are very important to us Filipinos,” the information office quoted Leonardia as saying.

“Even while we close cemeteries to maintain our new low COVID-19 rates, we will not ignore this need.”

Internment and burial services will still be allowed from October 30 to November 2, but this will be strictly limited to immediate family.

The city government hosted a collective prayer service for the dead on Wednesday evening, October 27, attended by more than 3,000 viewers.