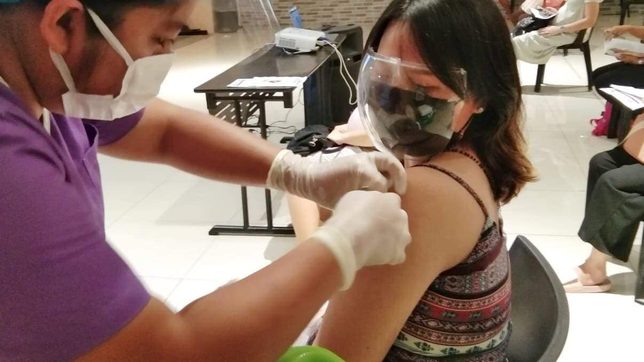 The COVID-19 death toll in this city is more than one and a half times the previous high recorded in September 2020, the local Emergency Operations Center said on September 27.

The deaths, she said, are being fueled by the spread of the virus in communities with low vaccination rates.

“Our number of deaths this year as of September 28, 2021 almost doubled and we are averaging 109 infections daily. Our health frontliners are pointing out that those experiencing severe COVID cases in hospitals are those who remain unvaccinated,” the EOC executive said.

Before September ends, Bacolod reaches most COVID-19 deaths in a month New daily cases since September 23 range from 132 to 165 on September 24, much higher than the monthly average cited by Ang.

The DOH categorizes an average daily attack rate (ADAR) of 7 as high-risk. Between September 11 and September 17, Bacolod’s ADAR rate jumped from 9.18 to 19.68, almost thrice the high-risk floor number.

The ADAR is the number of previously well people who get infected per 100,000 population.

The city’s positivity rate – the percentage of people with positive results among those tested – also rose from 18% on September 11 to 28% on September 27. That means more than one in every four people tested are infected.

The spike in cases and the swift deterioration of many unvaccinated cases have placed Bacolod’s hospital care utilization in the high-risk area of 84.68%

CLMMRH explained its decision to limit admissions to extreme emergencies by citing an overflowing emergency room, staffing problems caused by exposure or infections, and the need to reserve beds for newborns infected by their mothers.

“Virtually all hospitalizations and deaths have been among the unvaccinated,” said the EOC.

Ang said that the spike in COVID-19 cases has put the focus back on prevention. She stressed that a major worry right now is Delta, a highly contagious SARS-CoV-2 virus strain.

Dr. Rosalie Deocampo, EOC deputy for contact-tracing cluster, said that 90 of the 140 infections recorded on September 25 were household transmissions, six were workplace acquired, seven from gatherings or meetings outside of households, and one a prison infection.

She said of the 140, 75 were classified as new cases while 65 were close contacts traced and tested.

Of the 133 cases on September 26, the 69 new infections were almost matched by 64 tested as close contacts.

The following day, September 26, the city had 133 cases; 69 of which were new infections and 64 were close contacts, Deocampo explained. Household infections caused 92 cases while only 41 were outside transmissions, she added.

On September 27, 60 of the 151 cases were new cases and 91 close contacts. Two thirds or 110 cases were household transmissions, Deocampo said.

The city has tried various methods of increasing its vaccine coverage. Five mobile teams on buses go to barangays, subdivisions and workplaces. Two malls and a drive-through also provide vaccine services. The city even has two overnight vaccine centers.

Ang, however, said there continues to be high vaccine hesitancy.

She said many who refused appeals to be vaccinated during grassroots outreach parroted the “fake news that they will become zombies”.

The city administrator also urged the Department of Education to choose only vaccinated teachers for the select face-to-face classes.

The EOC and the Bacolod CoVaC, in coordination with the Department of Education’s City Schools Division headed by Gladys Amelaine Sales, made an effort to give jabs to over 700 unvaccinated teachers two Saturdays ago, Ang said.

“To our dismay, only 45 showed up for inoculation,” Ang continued.

“Our concern now are the schoolchildren who are unprotected as we cannot yet administer COVID jabs for them,” she stressed.

Sixteen schools in Bacolod and Negros Occidental have been chosen to participate in the education department’s trial run of face to face classes. – Rappler.com