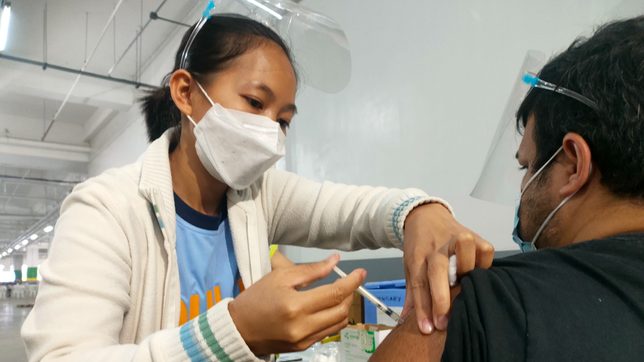 Hundreds wait in line at one of Baguio City's mega vaccination site last July 13, 2021 for their second dose of the Pfizer vaccine.

Baguio City has surpassed the 70% COVID-19 herd immunity target set by the Department of Health (DOH) for its adult population (18 and above), the City Health Services Office (CHSO) said on Wednesday, November 17.

The city also started providing booster shots for health care workers on November 17 at the SLU Gym but did not yet release figures. Seniors are also set to receive their booster doses beginning December 6.

Last November 9, CHSO chief Dr. Rowena Galpo said the city could achieve the 95%  target immunization of the eligible population if 800 persons are vaccinated daily for 20 days or up to November 30.

If the city can ramp up their vaccination at an average of 2,500 first doses daily, Galpo said it could  achieve 80% of the target by November 20.

The CHSO chief added that if all the adolescent groups register and line up for the vaccination, the city can achieve 100% first dose vaccination by November 24.

Galpo said the city has 127,597 total doses of Sinovac, AstraZeneca, Moderna, Pfizer, and Gamaleya in its latest inventory. The city received 21,060 doses of Pfizer on November 6 and another 5,350 doses of AstraZeneca on November 8 from the World Health Organization’s COVAX facility.

DOH also gave the city 27,000 AstraZeneca doses; 17,000 are for this month’s second dose administration.  The city has likewise received the 18,800 AstraZeneca doses it purchased, with payment due on November 26.
Galpo said the city now has 97,000 doses, some of which are being administered at the drive-through sites.

Other LGUs like Mariveles, Bataan and San Marcelino, Zambales have also expressed interest in tapping Baguio’s supply. The town of Enrile in Cagayan has also manifested its intention to acquire 10,000 doses.

Magalong said the city remains in Alert Level 3 but “doing okay … and getting back to normal.” He cited the acceptance of tourists and the population’s increasing mobility. He said the latest reports show increasing figures for retails, park visits, and activities in workplaces.

Even with increased activity, Magalong said he does not expect the city’s COVID-19 reproduction number to go higher than  1.0.

The mayor added that with the significant decrease of isolation facility occupancy to about 18%, the city would temporarily close two isolation centers.

According to Magalong, the IATF based the city’s classification on previous data but said he would no longer appeal for a lower status.

“At the end of the day, it is the local government who will implement it. I have also talked to the secretary [Carlito Galvez], and he knows that we have been implementing Alert Level 2 guidelines although we are in Alert Level 3,” he added. – Rappler.com