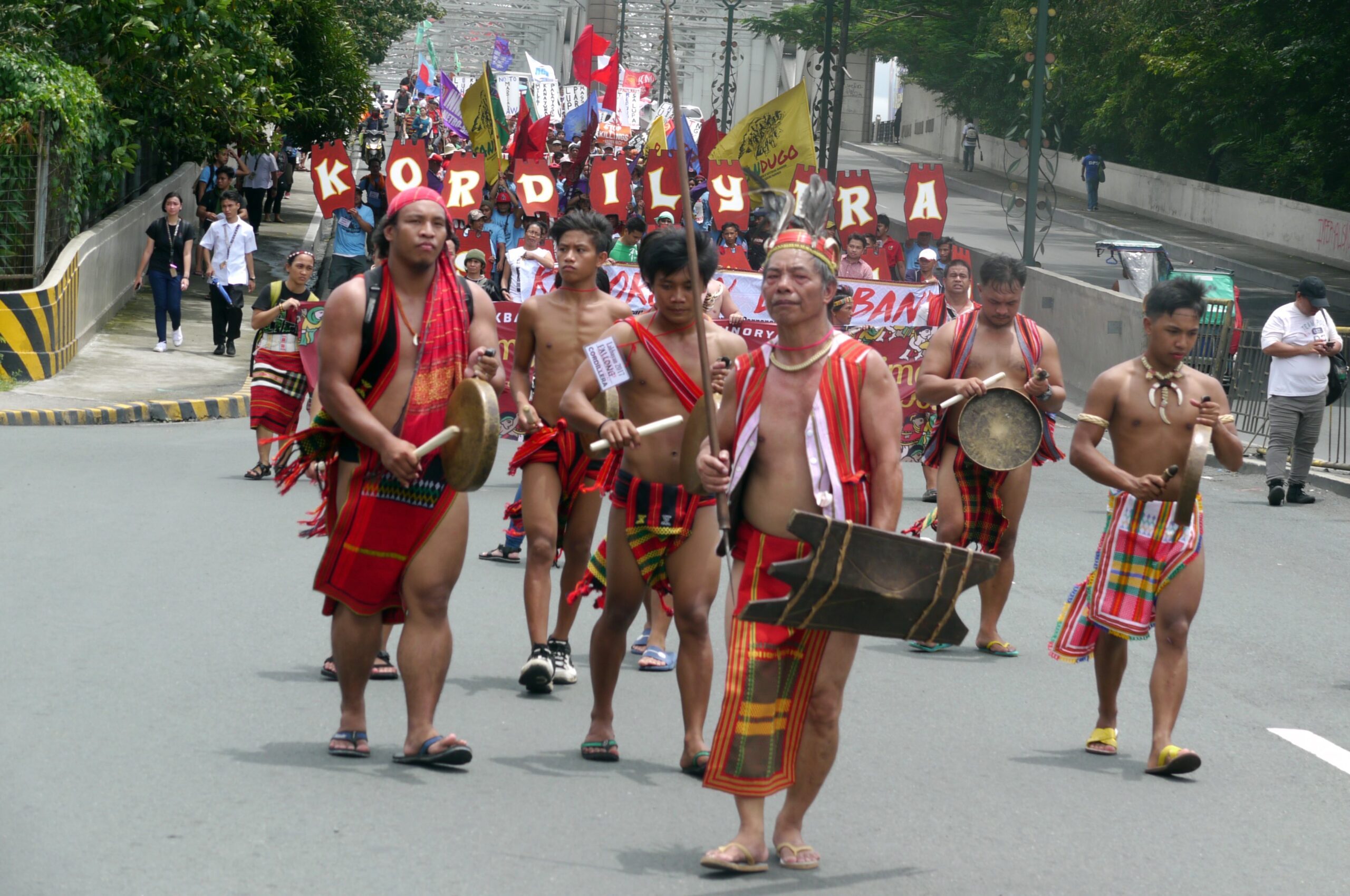 HERITAGE AND STRUGGLE. Delegates from the Cordillera march during the 2017 Lakbayan ng Pambansang Minorya in Metro Manila to highlight indigenous peoples' struggles against development aggression in ancestral lands.

Facebook Twitter Copy URL
Copied
Organizers commit 'to increase awareness about the struggles that Igorots are facing that threaten their rights, lands, territories, and resources'

BAGUIO, Philippines – The spectacle of handsome men with chiseled bodies strutting on a ramp, wearing bahag, the male Igorot loincloth, has sparked a new debate on the commercial exploitation of the Cordillera peoples’ culture.

Social media debate over viral  photos and videos of the “Man of the World” pageant missed the point by focusing on bahag-wearing techniques, Igorots and indigenous peoples’ (IP) rights advocates told Rappler in separate interviews.

The pageant culminates on Saturday evening, June 18, with the winner’s coronation at the Baguio Convention Center.

Cultural appropriation is defined as  “adopting cultural elements of a minority group in an exploitative, disrespectful, or stereotypical way.”

“I was shocked and slighted. While I grew here in the city, we were raised to be aware of the practical uses and wearing of our traditional attire,” Claver said.

Her group said the performance “left the impression that the bahag was just used for entertainment and exhibition.”

Online posts of the contestants in bahag show them in sexualized poses. Many of the responses are full of sexual innuendos.

Reacting to the online discussion, the National Commission on Indigenous Peoples-Cordillera Administrative Region (NCIP-CAR) said it “did not allow nor tolerate the way the bahag was worn during the said competition.”

But it said accountability for the way the contestants used the loincloth “rests solely with the organizers and their supposed cultural consultant.”

“The different Igorot bahag were properly worn during the event,” organizers insisted. “The event portrayed two ways of wearing the bahag – the usual/regular way, and the one where the suspended portions were tucked on the side.”

The event’s cultural consultant, Maria Catbagan-Aplaten, said they taught the candidates “how the bahag is used, and oriented them about the significance of the bahag, the designs, and the culture that these represent.”

Claver noted that recurring issues on using Cordillera culture for tourism and profit made the pageant “more unacceptable and infuriating.”

The exploitation of the Cordillera people is not new, PIGSA said. They cited the 1887 Philippine Exposition of the Spaniards, where they displayed Igorots and their culture as bizarre and savage.

They also recalled the Grand Canao in Baguio City sponsored by the Ministry of Tourism from 1980 to 1983 that spurred a protest movement against the commercialization of culture, and gave birth to PIGSA.

However, IP rights advocate Mary Anne Bayang, one of the judges in the event, saw no appropriation or commodification of the Cordillera attire.

“(T)he candidates did not use the wanes (Kankanaey term for the bahag) and claim this as their own; the wanes was not used for trade or profit,” said the Sagada-born and raised lawyer in an online interview on June 16.

Bayang pointed out that the trade in indigenous garments in tourist areas is a better example of commercialization.

While the event has numerous sponsors, organizers claimed the proceeds would create “300 jobs,” and aid weavers of Kalinga, persons with disabilities in Apayao, cultural awareness advocates in arts and film, the Asian Brand Alliance for small and medium enterprises, and the Man of the World Charity and Foundation.

Artist and filmmaker Julius Lumiqued said the event failed to consider the sensibilities of the Igorots.

The Kankanaey from Besao, Mountain Province, pointed out that every indigenous group in the region “has a level of conservativeness, hence, the bashing.”

Critics and organizers agreed that conversation around the incident should go beyond whether the candidates wore the Cordillera loincloth properly.

The organizers acknowledged the need to go past the promotion of the “beauty of our culture and our lands.” They committed “to increase awareness about the struggles that Igorots are facing that threaten their rights, lands, territories, and resources.”

“The tendency to nitpick on one angle of a very complex issue on the cultural crisis” has overshadowed more critical matters, said writer and Dap-ayan ti Kultura ti Kordilyera vice chairperson Luchie Maranan.

“The question on the proper wearing of the bahag is useless if the NCIP allows development aggression that’s tearing the very fabric of indigenous life and culture,” Maranan said.

“It is concerning that we pay much attention on petty and trivial matters, distracting the public from NCIP’s accountability for the destruction of culture of indigenous peoples,” she added, noting several controversial projects in the region that “threatens the ancestral domain where IP culture should thrive.”

He also said the NCIP focuses on “healing and reconciliation” and does not take issues to the streets.

Veteran IP rights activists Beverly Longid said in a June 16 interview that the issue boiled down “to how society looks at indigenous peoples.”

“For one, it is really an object of fascination and curiosity. There is also the lack of understanding and ignorance, [resulting to] being reduced to the physical attributes [of the people and culture] like the beautiful design of the attire, the tattoo,” she said.

Longid, a Bontok-Kankanaey from Mountain Province, said “many fail to understand the depth of these things as a way of life, and an assertion to something [the IPs have] that is fast disintegrating.”

“It’s easier for many to see and appreciate our clothes, dances, and crafts compared to understanding our problems and struggles, and take positions on these issues. That is why at the end of the day, despite all the appreciation of our culture, IPs still face discrimination,” she added.  – Rappler.com