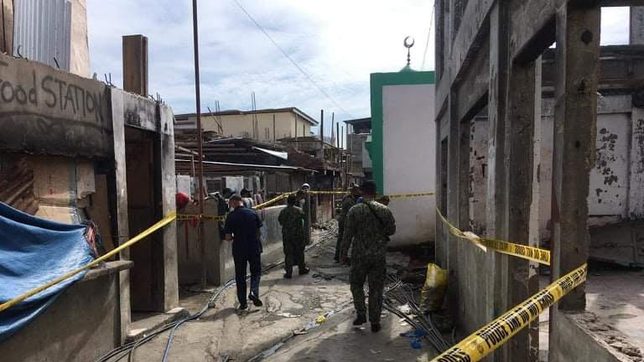 CRIME SCENE. Police look for clues in the area where two mayors from Basilan province and their aides were attacked at Baliwasan Seaside, Zamboanga City, on Monday, December 6.

GENERAL SANTOS, Philippines – The Bangsamoro Autonomous Region in Muslim Mindanao (BARMM) government called on authorities to speed up the investigation and arrest those behind the killing in broad daylight of Mayor Darussalam Saguindilan Lajid of AlBarka, Basilan, and a security aide aide in Zamboanga City on Monday, December 6.

The attack also hurt another Basilan mayor, Alih Salih of Akbar, and another aide.

BARMM Chief Minister Ahod Murad Ebrahim called the gun attack “a cowardly act” and an affront “not only against the people of Basilan but on the democratic principles and values of the entire Bangsamoro people.”

Ebrahim appealed to the Philippine National Police to find out why the attack was staged, the motive behind it, the brains behind it, and make arrests.

Ebrahim said: “In this difficult and emotional time, we call for sobriety and patience. Let us exercise restraint while the investigation is ongoing. These perpetrators shall answer to justice.”

BARMM interior minister Naguib Sinarimbo also condemned the attack, and described it as “a treacherous act.”

Police said motorcycle-riding gunmen attacked mayors Lajid and Salih, and their aides while they were walking to a mosque along the Baliwasan seaside in Zamboanga City past 8 am on Monday.

Aside from Lajid, the gunmen also killed his security aide and driver Barad Nuruddin.

Lahid filed a certificate of candidacy for vice mayor in his town for the 2022 elections while Salih was seeking reelection.

Lajid and Nuruddin were declared dead on arrival at a Zamboanga hospital.

Police said the mayors were traveling from Basilan, and were about to proceed to Davao City to attend a meeting of the League of Municipalities of the Philippines. – Rappler.com