CRIME SCENE. A police photo of the area where two mayors from Basilan province and their aides were attacked at Baliwasan Seaside, Zamboanga City, on Monday, December 6.

Facebook Twitter Copy URL
Copied
Brigadier General Domingo Gobway, commander of the Joint Task Force Basilan, says they were going to announcement a rido settlement on December 8. That will no longer happen.

But that resolution will no longer happen, and peace will remain ever more elusive.

Instead of peace, it was the lifeless body of Lajid which returned to Al-Barka town in Basilan province via speedboat noon of December 6, Monday.

Lajid was killed in an ambush Monday morning at the seaside of the Baliwasan, a coastal village in Zamboanga City. 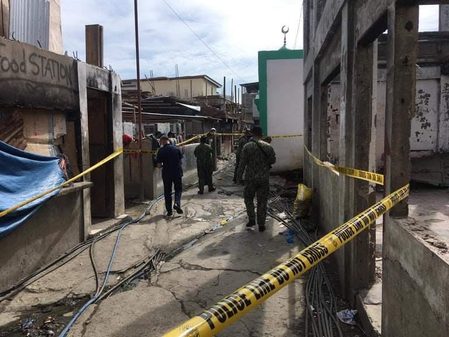 In his report to the Zamboanga Peninsula Police Regional Office (PRO9), Zamboanga City Police Director Colonel Rexmel Reyes said that aside from Lajid, also killed in the attack was Barad Nuruddin, bodyguard-cousin of Mayor Alih Awal Sali of Akbar town also in Basilan.

Sali, himself, survived the attack and was reported in stable condition by his attending physician at a hospital in Zamboanga City.

The police Scene of Crime Operatives (SOCO) said they recovered five spent .45 caliber shells. Two of the four unidentified suspects were spotted by eyewitnesses. One was described a wearing a black t-shirt, the other in blue shirt and denim pants. There were no descriptions on the two others.

Police said that at past 8 am, Monday, the two Basilan mayors arrived at a private port in front of the house of fisherman Zaldy Hamid in Baliwasan Seaside, Zamboanga City. They were with their wives, children, and some civilian escorts.

Police Corporal Alnajar Hussam reported that the two groups disembarked from the speedboat, then were seen walking down the alley towards the main road of Baliwasan. When they reached the mosque, the suspects shot them.

Baliwasan Barangay Kagawad Michael Gregorio said that the perpetrators could not have left the vicinity as they were seen heading towards the interior of the village where houses were dense, or built close together.

While the motive of the shooting remained unknown as of press time, both mayors were running for reelection for the May 2022 polls.

Basilan Governor Jim Salliman said it still could not be determined that the killing was election-related, and related to the shooting incident on August 3.

(We don’t know. These two have enemies. But the military has arranged peace settlements last month. In fact, there was an amicable settlement, although there were still issues to be cleared. But both agreed to look for the perpetrators of the August shooting.)

Last August 3, armed followers of Lajid and Jakilan engaged in a gunfight where two persons were killed. The fatalities were Lajid’s nephew, Amman Lajid, and Topy Kinista, Jakilan’s relative and supporter.

Gobway pushed the two parties into a dialogue and he confirmed the amicable settlement last November 20.

(It’s true that there was a rido settlement reached on November 20 between the mayor and the vice mayor here at the brigade headquarters. However, their aides were not included because on the night before the settlement talks a bodyguard of the vice mayor was killed in this own house in Lamitan City.)

Salliman however said that while he helped in the resolution, there were still unresolved issues unknown to the intervening body, as the warring leaders were cousins.  The Basilan governor said that Lajid did not favor armed conflict, which was why he engaged in peace and development in his first two terms in public service.  “In fact, his children are professionals,” he said. His son is the town’s firs medical doctor from Al-Barka.

Basilan Representative and Deputy House Speaker Mujiv Hataman expressed his grief in his social media account. In a phone interview Hataman described late mayor as a good leader who had served his people and province well, having been participative in the security efforts of Al-Barka, from the time of the initiatives of the former Autonomous Region in Muslim Mindanao (ARMM).

Hataman recalled when he was ARMM Governor, Lajid focused on the implementation of infrastructure projects in his municipality. Although serving his last term, Lajid belonged to another political party, they had been together in motorcycling and other sports activities. – Rappler.com

Frencie Carreon is a Mindanao-based Journalist and an awardee of the Aries Rufo Journalism Fellowship.