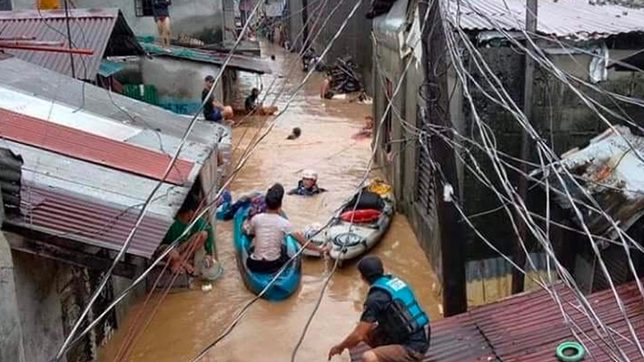 Flooding in Balanga City in Bataan on July 29 due to hanging habagat.

Heavy rainfall triggered by the southwest monsoon or hanging habagat Thursday, July 29, caused severe flooding in Balanga City, forcing the Bataan provincial government to declare a “state of calamity” in the capitol.

The Provincial Disaster Risk Reduction and Management Office (PDRRMO), said a total of 525 families or 1,430 individuals have been rescued and brought evacuation areas. Another 578 families are outside evacuation areas in the municipalities of Abucay, Hermosa, Orani, Orion, Morong, Bagac, Pilar, Mariveles, and Balanga City.

National agencies including the police, fire protection, military, and rescue offices namely CDRRMO, City Peace and Order Office and GSO were deployed to barangays that were submerged in floodwater. The Bataan provincial government issued Resolution No. 227, Series of 2021 on Thursday after intense rains submerged several barangays in Balanga City in neck-deep floodwaters.

Local government units (LGUs) were on alert to ensure the safety of their constituents as rains continued to pour.

Meanwhile, a portion of the Santuario Dela Sagrada Familia Shrine in Barangay Tala, Orani collapsed due to continuous flooding.

The town of Dinalupihan was also declared under state of calamity under Resolution No. 338 s. 2021 due to flooding. – Rappler.com