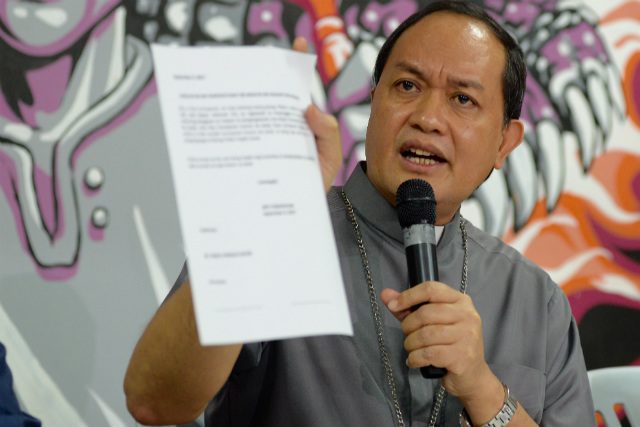 Facebook Twitter Copy URL
Copied
'May God have mercy on your souls!' says Bishop Pablo Virgilio David after the government banned religious gatherings in NCR Plus during Holy Week

Caloocan Bishop Pablo Virgilio David slammed the Duterte government for banning religious gatherings while allowing gyms and spas to run on a limited capacity for two weeks in Metro Manila and 4 nearby provinces.

An internationally trained Bible scholar known for his prose, the bishop could not hide his anger as he wrote in all caps on Monday, March 22.

David, vice president of the Catholic Bishops’ Conference of the Philippines (CBCP), posted on his Facebook page: “IN SPITE OF OUR ADHERENCE TO STRICT PROTOCOL YOU LOCK DOWN OUR CHURCHES DURING THE HOLIEST TIME OF THE YEAR AND ALLOW 70 PERCENT CAPACITY IN FITNESS CENTERS AND 50 PERCENT IN ESTABLISHMENTS FOR PERSONAL CARE SERVICES, INCLUDING SPAS?!!! ALL RIGHT. MAY GOD HAVE MERCY ON YOUR SOULS!”

David added that the order was issued in an “instant” with “not even a modicum of dialogue.” He hoped the government’s coronavirus task force would allow churches to operate at 20-30% capacity while following strict health protocols.

“If this is not a return to ECQ total lockdown situation, why forbid our religious gatherings? Isn’t this a violation of religious freedom?” the bishop asked.

This comes after the Duterte government banned mass gatherings, including religious activities, in Metro Manila and 4 nearby provinces – an area now called NCR Plus – from March 22 to April 4.

The government implemented this ban, along with other measures, to stem the record-breaking number of coronavirus cases in the Philippines. New cases of COVID-19 rose on Monday, March 22, to more than 8,000, the highest since the pandemic began.

Despite the ban on religious gatherings, however, the government is allowing commercial establishments, including gyms and spas, to run on a limited capacity to save the economy.

Presidential Spokesperson Harry Roque said in a press briefing on Monday that gyms and fitness centers in these areas may operate by up to 75% capacity, while spas are allowed up to 50%. Still, local government units may choose to suspend their operations, according to Roque.

Holy Week is also a time for vacations, given the long weekend from Maundy Thursday to Easter Sunday. Staycations within the “bubble area” are allowed, according to Roque. The issue of restricting religious activities is a tricky subject as it straddles the thin line between public safety and freedom of worship.

On the one hand, experts have cautioned against religious events becoming “super-spreader events,” with the potential to infect many people, especially for mass gatherings in enclosed areas that involve touch and singing. The Texas Medical Association considers attending a service with 500 or more participants as “high risk” for contracting COVID-19.

Bishops had previously argued, however, that strict limits to public worship are unfair for people who consider faith as essential to their lives. In 2020, some bishops protested a similar rule, when Metro Manila and the rest of Luzon were transitioning to the then less-strict GCQ.

Then, churches under GCQ were only allowed to accommodate 10 people no matter its capacity. This was eventually loosened to 30% maximum capacity in October 2020, and then to 50% just last month.

“The malls have opened, the markets are open, the offices are open, and they say the church? Under general quarantine, only 10 people. Is that fair? Is it just? Is it just to be prevented from worshiping the Lord in spirit and in truth?” said Lingayen-Dagupan Archbishop Socrates Villegas, former president of the CBCP, in an email to Rappler in June 2020.

“Religion is being treated unfairly and unequally. Our social distancing in church pews are ready. Our hygiene protocols are in place. Our worshiping faithful wear masks when they leave home. They do this as a Catholic moral obligation. They express their faith by obeying the quarantine protocols. This is an unjust immoral restriction on the freedom to worship,” Villegas said.

Some bishops, however, took no chances amid the worrying surge. Before the announcement of new restrictions yesterday, at least three dioceses in Metro Manila took the initiative to suspend on-site religious activities until Easter.

“Voluntarily closing our places of worship at the highest point of our liturgical year is heartbreaking. But we also open our eyes to a situation that puts many of our faithful at risk,” said Cubao Bishop Honesto Ongtioco in a statement on Sunday, March 21, announcing his decision. – Rappler.com