Bohol Governor Arthur Yap said the “NCR Plus” bubble created by the national government to contain the surge of the coronavirus would also be in the interest of provinces.

“NCR Plus” refers to the National Capital Region being “merged” with and placed under the same lockdown rules as the surrounding provinces of Bulacan, Rizal, Laguna, and Cavite.

“We have to break this surge. I’m sure the League of Provinces [of the Philippines] are going to support the [‘NCR Plus’ bubble] program of the President because it affects us,” Yap said during the Kapihan sa Manila Bay forum on Wednesday, March 24.

The Philippines is experiencing its highest surge of cases since the pandemic began, with the bulk of the cases reported in Metro Manila. For the most part of the first outbreak, provinces with smaller populations in the Visayas were able to keep their COVID-19 numbers controlled.

This was until the national government began forcing them to accept stranded residents from the bigger cities like Metro Manila and Cebu. Returning residents would often test positive upon arriving in their home provinces.

The problem with this is that health care capacity is limited in rural towns and provinces with smaller populations. 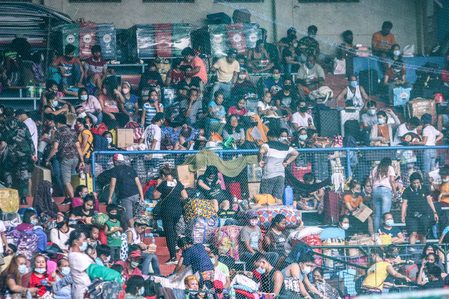 “Even if the effect on us is [only] in the hundreds of cases, still, it’s a big percentage of an increase,” Yap said.

“We’d like to keep them (COVID-19 cases) outside of our provinces, because our provinces have limited capabilities to address infections because of our limited budgets and limited medical facilities in the provinces,” the Bohol governor added.

Bohol currently has 317 active cases for the entire province of a total of 1,426 cases.

Nearby Cebu has been experiencing a surge since early January with over 20,000 total cases in both Cebu City and province.

“Unless we can break the surge in different parts of the country, we have to accept that, as an archipelago, there is a great correlation with infection rates all over the country,” Yap said.

Bohol’s economy is heavily reliant on tourism, and the province was planning on reopening to tourists before the latest surge prompted the national government to implement stricter COVID-19 health measures.

Bohol is still accepting tourists despite the surge as long as they bring a swab test with a negative COVID-19 result that was taken 72 hours prior to their departure. – Rappler.com