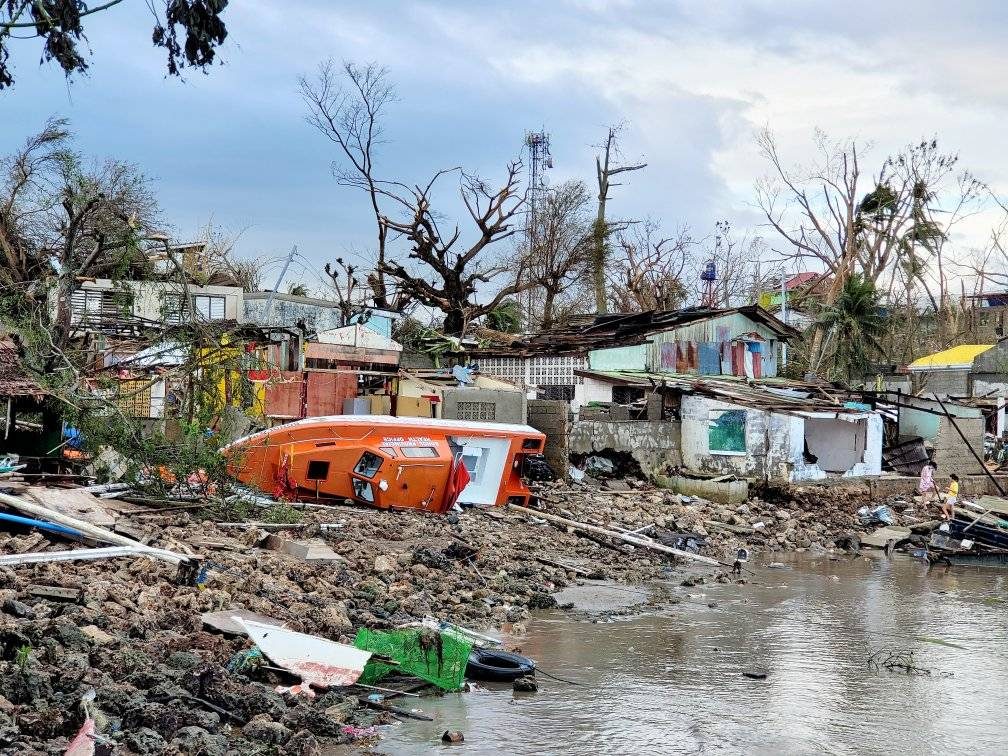 The death toll from Typhoon Odette (Rai) in Bohol has climbed to 63, Governor Arthur Yap said on Sunday, December 19, as he appealed for hundreds of generators to help the province deal with a critical shortage in drinking water.

The Bohol governor also asked the Philippine Ports Authority to open its facilities to help local government units (LGUs) get access to power and communications.

“Please open your gates,” he urged James Gantalao, port manager of Bohol’s Port Management Office. Yap mentioned Tubigon port, 54 kilometers from Tagbilaran City, but also urged Gantalao to give LGUs access to all of the agency’s facilities in the province.

Yap, in a brief message posted on his Facebook page, read text messages from many of the province’s mayors, all of whom reported problems with power and connectivity.

In Getafe, a northern port town 92 kilometers from the provincial capital Tagbilaran, Mayor Casey Camacho said only a quarter of houses remain standing. The mayor also appealed for food packs and water for the town’s 33,000 residents.

In San Miguel, Mayor Virgilio Mendez said the initial estimated cost of damage to infrastructure and agriculture was P500 million. The local government, he said, badly needed generators and gasoline to respond to the needs of its 25,356 population.

The Bohol governor reminded local chief executives to use their powers to undertake emergency procurement, and even to ask the private sector to turn over supplies.

But he also called on the Department of Environment and Natural Resources (DENR) and the Department of Public Works and Highways (DPWH) to assert their authority over contractors and other service providers to speed up recovery.

“DENR, you have the registry of all chainsaw operators. You give them licenses. Order them to report to barangay captains because travel on smaller roads is still not possible,” Yap said, mentioning the big number of toppled trees.

Yap said the DPWH should call in all contractors to send equipment to the national highway to increase usable lanes to two, “so as not to block the flow of logistics.”

The scope of destruction wrought by Odette was highlighted in a collection of photos sent by Mayor Fernando Estavilla of President Carlos P. Garcia, also called Isla de Pitogo, an island municipality 121 kilometers from the capital, facing Southern Leyte.

In Southern Leyte, nongovernmental organization Leyte Center for Development bared the results of its initial assessment conducted on Saturday, December 18.

“The devastation to livelihood and property was gargantuan: storm surges up to 12 feet high in barangays Hindag-an and Lepanto of Saint Bernard; barangays Tigbao and Oticon of Libagin town; and two barangays of San Juan,” Jerusalem told Rappler.

“At least 300 houses were totally washed out and many others partially damaged. Fisherfolk lost their motorboats, palay destroyed,” she added.

Residents said no regional or provincial government agency had checked on them as of Saturday, according to Jerusalem. “They need food, shelter materials, and livelihood support.”

Saint Bernard town, with seven dead residents, shared its status report on the damage caused by Odette, saying 296 houses were destroyed and 588 others partially damaged. A quarter of its 28,414 population have no water supply.

The Leyte Center for Development also had partial figures of damage to homes in Silago town, based on interviews with residents and barangay officials.

Jerusalem also said there were reported deaths in Libagon, but she withheld figures until confirmation by the LGU.

The group’s report validated Silago Vice Mayor Lemuel Honor’s claim of rural communities struggling in the aftermath of the typhoon. Honor traveled more than 100 kilometers to Tacloban City, Leyte, on Saturday to air his appeal for aid. He said the town was running out of food, the national highway and roads to rural villages were blocked, and there was no power, no internet, and no phone connectivity. – Rappler.com