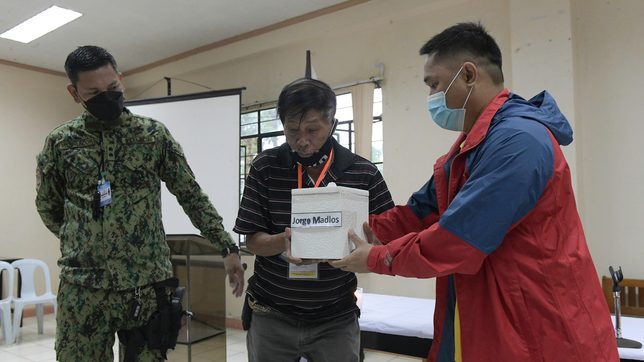 Facebook Twitter Copy URL
Copied
'We already offered his life to the God Almighty. His time was up,' says Rito Madlos, the younger brother of the slain New People's Army leader

Exactly a week after his cremation, the ashes of slain communist leader Jorge “Ka Oris” Madlos were turned over by town officials of Impasug-ong to his younger brother, Rito, on Tuesday, November 9.

Impasug-ong Mayor Anthony Uy handed over Madlos’ ashes, which were placed in a simple white box, to Rito in a simple ceremony at the municipal hall.

Father Arnel Villamino of the Immaculate Conception Church officiated the Mass before the turnover ceremony.

Rito, who traveled all the way from Surigao City, said it was a sad ending for the rebel leader whose exploits enthralled thousands of Mindanao residents over the past five decades.

“Now my brother is dead. Let us move on,” he said.

Rito extended the gratitude of his family to Uy and the military for the proper treatment of his brother’s remains and the warm welcome he received in the town.

“We already offered his life to the God Almighty. His time was up,” Rito said.

During the ceremony, Army Lieutenant Abigail Lorenzo of the 8th Infantry Battalion handed over the box containing the ashes to Uy, who then gave it to Rito.

The town officials also processed the death certificates and other documents pertaining to Madlos.

The ashes of Madlos’ medical aide, Eighfel dela Peña, who was also killed on October 29, were turned over to her family a day earlier on Monday, November 8.

Uy turned over the ashes of De la Peña to her mother, Normelita, who brought the box back to their hometown in San Luis, Agusan del Sur.

De la Peña had tested positive for the virus, too.

The military said Madlos and De la Peña were killed during a military operation in Sitio Gabunan, Barangay Dumaalaguing in Impasug-ong town on October 29.

In a statement signed by Madlos’ wife, Myrna “Maria Malaya” Sularte, the New People’s Army claimed that the rebel leader was killed in an ambush by the military in Impasug-ong town a night earlier. – Rappler.com