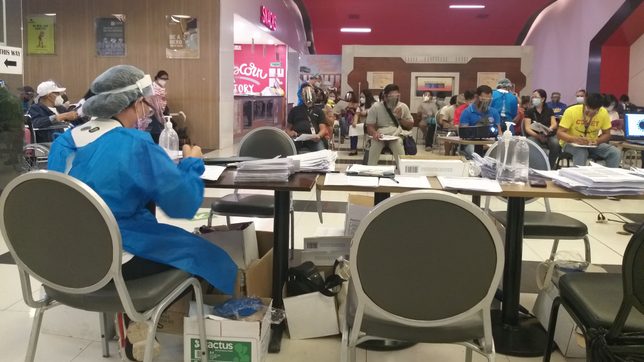 With the increase in cases also came a rise in COVID-19 deaths. In just three days since Thursday, August 5, the health department registered 33 deaths throughout the region, 21 of which were recorded mostly in Cagayan de Oro on Sunday, August 8.

The Department of Health (DOH) in Northern Mindanao, however, recorded more – it logged 250 new cases in Cagayan de Oro the same day.

But on Sunday, the DOH logged another 250 cases in Cagayan de Oro.

Cagayan de Oro ranked third in the Octa Research group’s August 2 list of COVID-19 hot spots outside the National Capital Region (NCR) after Cebu and Davao cities. Two other Mindanao cities – Davao and General Santos – were on that list, too.

Moreno said the city hall-owned JR Borja Memorial General Hospital, for one, has been admitting COVID-19 patients to help ease the pressure on the state-run Northern Mindanao Medical Center (NMMC), the region’s primary referral hospital for such cases.

He said the city government-owned hospital was never meant to be a COVID-19 hospital, but it had no choice but to admit at least 60 virus carriers early this month alone.

Moreno said city hall was strategizing and looking for ways for the local government-run hospital to admit more COVID-19 patients.

Most areas in Northern Mindanao have also been seeing surges in COVID-19 infections since late last week.

From 79 on Thursday, the documented infections in Misamis Oriental rose by 63.7%, at 124 cases, based on the data of the DOH. This further climbed to 161 cases on Sunday.

The most dramatic surge in the region was recorded in Bukidnon province where the COVID-19 cases increased nearly four times in just 24 hours. From 84 cases documented by the health department on Thursday, the infections in Bukidnon rose to 313 on Friday. But on Sunday, Bukidnon’s COVID-19 cases were down to 218.

Bukidnon has been placed under a less strict modified general community quarantine (MGCQ) classification after the government detected different variants of the COVID-19 with lineages from the United Kingdom and India there.

The first Delta variant (B.1.617.2) infection in Bukidnon was recorded in Talakag, an upland town near a rural village in Cagayan de Oro where at least 21 infections of the same variant were detected on separate occasions.

The surges in cases in key areas of Northern Mindanao brought the 24-hour growth in COVID-19 infections in the region from 504 to 659 as of Friday, August 6, DOH data showed. By Sunday, it further increased to 672, one of the highest, if not the highest, since June when the region saw its second wave of COVID-19 surges since 2020.

Iligan City also saw its cases increasing from 13 on Friday to 21 on Sunday.

Misamis Occidental recorded 8 cases on Friday and another 8 on Sunday and Lanao del Norte from 1 to 4 during the same period.

Only Camiguin Island registered a decrease to a single-digit figure, from 22 on Friday to 7 on Sunday. – Rappler.com