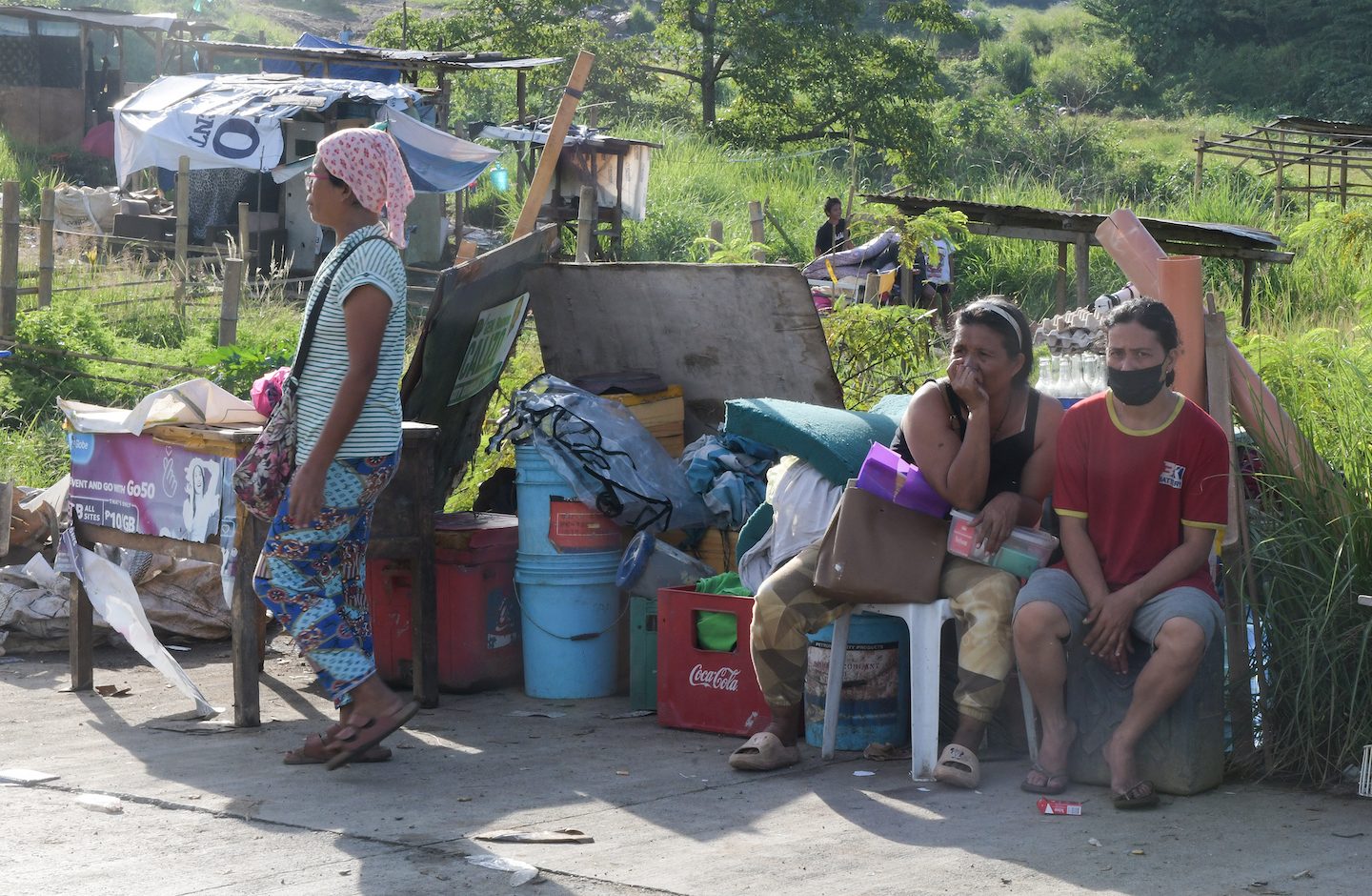 Informal settlers seat beside a road with their belongings after a demolition team dismantles their shanty in Zayas Landfill Road in Upper Carmen, Cagayan de Oro City on Tuesday, June 14, 2022. Photo by Froilan Gallardo

CAGAYAN DE ORO CITY, Philippines – Authorities started the demolition of more than a thousand shanties that sprouted almost overnight on a property in an emerging growth area in Cagayan de Oro’s most populous village on Tuesday, June 14.

The 25-hectare property, owned by Christine Cid, is located near the old city dump that was developed into an eco-park by the local government in the upper part of Barangay Carmen.

Major Evan Viñas, the spokesman of the Cagayan de Oro City Police Office (COCPO), said it would take days for the demolition team to dismantle more than 1,000 shanties erected by informal settlers on the property since January.

Viñas said a group duped the informal settlers into paying for 200-square meter lots along the Zayas Landfill Road.

Teams of police officers in riot gear came as early as 3 am on Tuesday to secure the area as demolition men implemented the order issued by a barangay chairperson who, incidentally, is the wife of mayor-elect and 1st District Representative Rolando “Klarex” Uy.

Carmen village councilor Cyril Ranile said the illegal occupants were notified about the demolition, and it started after negotiations for them to vacate the area.

Police said some of the informal settlers threatened to fight back days before the planned demolition, but as of Tuesday noon, the operation went on smoothly and peacefully.

As authorities implemented the order issued by Carmen barangay chairperson Rosemary Lorna Uy, several informal settlers at the side of the road were left grumbling as they watched members of the demolition team tear down their homes.

“The law has again sided with the rich. The poor are being persecuted again,” an informal settler who identified herself only as Yolly said.

Yolly also complained about paying a group of men who introduced themselves as Higaonon chieftains P1,700 for a piece of what they called the “Bagting Estate.”

“I had to borrow money to pay for the piece of land, and then borrow again to build our house,” said Mohammed Dalomacob from Bayang, Lanao del Sur.

Authorities said the group is led by one Amir Lumatao Alibug who claimed that the property was owned by an indigenous people’s group based on a supposed land ownership title secured during the Spanish occupation.

The late President Ferdinand E. Marcos issued Presidential Decree No. 892 on February 16, 1976, which discontinued the use of Spanish land titles as proof of ownership.

“I forked out another P200 when the datus (chieftains) came last Monday supposedly to be used to bribe the police,” Yolly alleged.

The barangay chairperson said she gave out the demolition order after the Cagayan de Oro City Office of the Building Official (OBO) confirmed that the constructions were done without a permit.

Earlier, police arrested six people, who allegedly posed as Higaonon chieftains, for promising lots to unsuspecting buyers for P5,000 each.

More than 15 Higaonon chieftains have denounced the group, called it fake, and demanded that they stop wearing Higaonon costumes. – with reports from Bobby Lagsa/Rappler.com