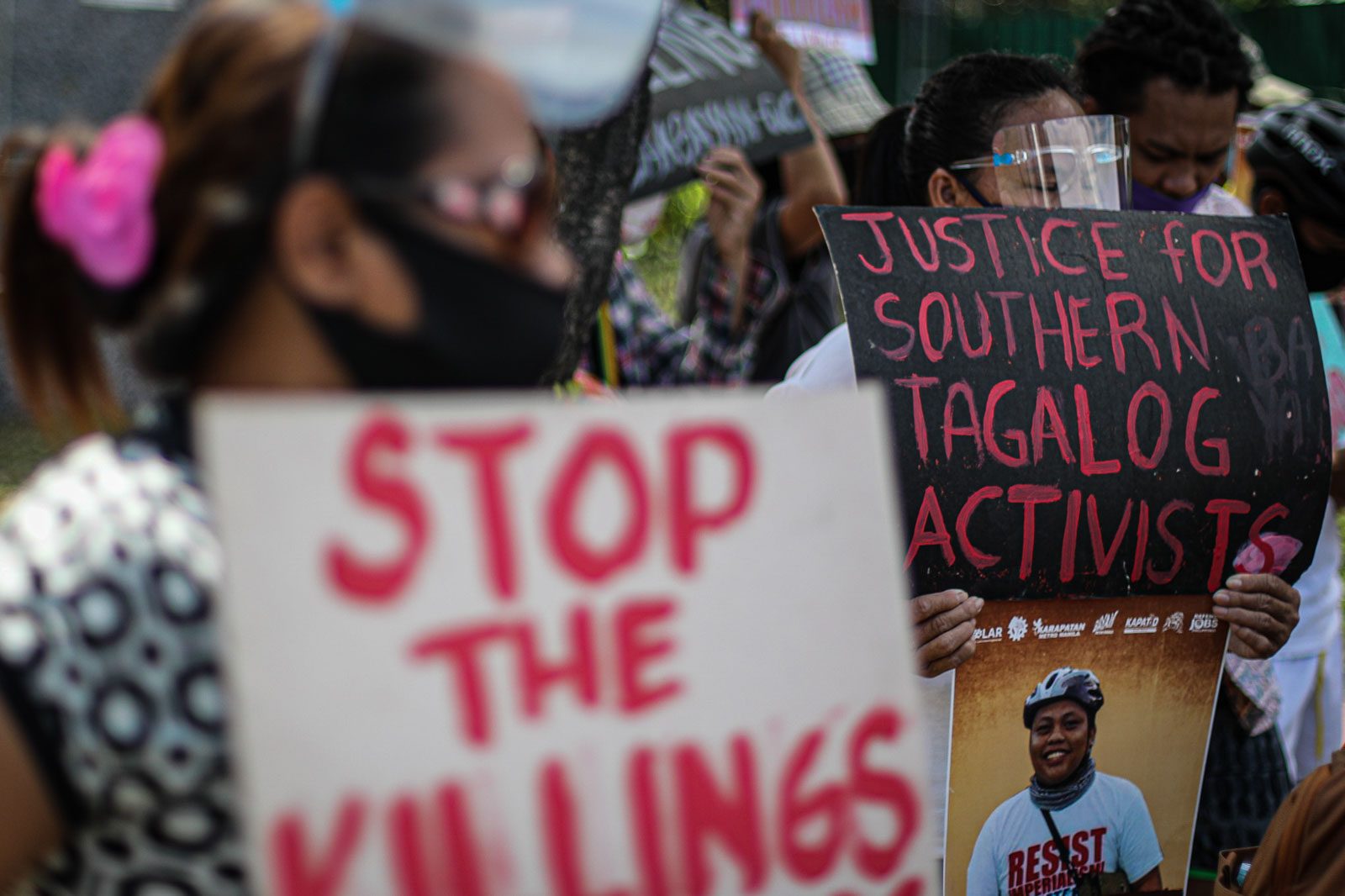 PROTEST. Human rights activists and members of progressive organizations stage a symbolic die-in protest in front of the Commission of Human Rights headquarters in Quezon City on March 10. 2021.

Facebook Twitter Copy URL
Copied
The UN technical assistance, slammed as being too soft and passive, has not even officially begun, as the DOJ is yet to sign the project document

The killing of 9 activists in the Calabarzon region revived criticisms that the earlier resolution of the United Nations Human Rights Council (HRC) to merely offer technical assistance in probing killings was “shameful.”

UN Special Rapporteur for Summary Executions Agnes Callamard noted that the killings continued even after the UN HRC resolution in October 2020. Groups had warned that more killings will occur if the UN HRC does not act more decisively.

“The killings in the Philippines continue. Remember the shameful HRC resolution in June limiting itself to technical support?” Callamard tweeted, reacting to the Calabarzon killings.

The technical assistance has not even officially begun, as the Department of Justice (DOJ) is yet to sign the project document that will kickstart funding from the UN.

“The projects have been lined up. We’ll let you know as soon as the project document has been signed,” Justice Secretary Menardo Guevarra told reporters on Wednesday, March 10.

“The next one will be a training program to enhance the investigative skills of prosecutors assigned to AO 35 cases,” said Guevarra, referring to the Administrative Order 35 (AO 35) task force that specializes in extrajudicial killings (EJKs).

Disappointment over the UN HRC’s resolution led Callamard to shift “hope” to the International Criminal Court (ICC), which is on track to determining by the first half of 2021 if it will open the crucial phase of investigation.

Guevarra said he will add the Calabarzon killings to the AO 35 task force’s list, but clarified that the task force might just assign these to the National Bureau of Investigation (NBI) if a killing does not fall under its jurisdiction.

AO 35 refers to killings of people with clear political causes and advocacies. All 9 victims in Calabarzon were activists killed in police operations that started with a search warrant.

Although Guevarra earlier said he was “disappointed” that there were still deaths in police operations, he echoed the government’s sentiment that calling the killings arbitrary is a prejudgment.

“Anyone, including the Office of the High Commissioner on Human Rights (OHCHR), must have sufficient information before making a judgment,” said Guevarra.

The secretary was referring to the statement of UN OHCHR, where it said “we are appalled by the apparently arbitrary killing of nine activists in simultaneous police-military operations.”

The Philippine Mission in Geneva also called out the UN OHCHR, saying it was a prejudgment.

The UN OHCHR has always been strong in its stance against killings in the Philippines, and came out in 2020 with a scathing report that concluded, among others, that policemen planted guns in drug war crime scenes.

But it’s the UN HRC that issued the “soft” resolution. The UN HRC consists of member countries, and resolutions are sometimes adopted by majority votes. Human rights advocates blamed inter-country politics for the resolution. – Rappler.com