Camarines Sur under state of calamity in wake of Rolly 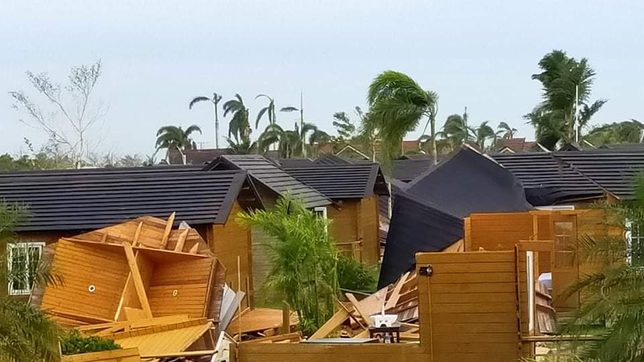 A portion of a water sports complex in Pili, Camarines Sur is seen destroyed by Super Typhoon Rolly on Monday, November 2, 7:15 am.

The provincial government of Camarines Sur on Monday November 2, placed the province under a state of calamity, a day after Super Typhoon Rolly (Goni) smashed through the Bicol region and left at least 20 people dead.

Camarines Sur in the Bicol region is one of several provinces that saw Rolly at its peak strength when it made landfall on Sunday morning, November 1.

The provincial board of councilors declared a state of calamity “due to strong winds and torrential rains, as well as extensive flooding and [damage] brought about by Typhoon ‘Rolly,'” as stated in Resolution No. 235 Series of 2020.

Placing a province under a state of calamity authorizes the provincial government to use its emergency funds and to reprogram other funds for disaster response. It also imposes a price ceiling on basic goods, and allows no-interest government loans to people most affected by a disaster.

Camarines Sur is the home province of Vice President Leni Robredo. She visited on Monday, and shared photos showing fallen trees and power lines, as well as flooded villages with badly damaged houses.

The entire Bicol region was without electricity as of Monday, Energy Secretary Alfonso Cusi said.

Super Typhoon Rolly affected more than two million people in Luzon and the Visayas. Now out over the West Philippine Sea, it is expected to exit the Philippine Area of Responsibility on Tuesday morning, November 3. – Rappler.com

LIST: Who is running in Camarines Sur in the 2022 Philippine elections?