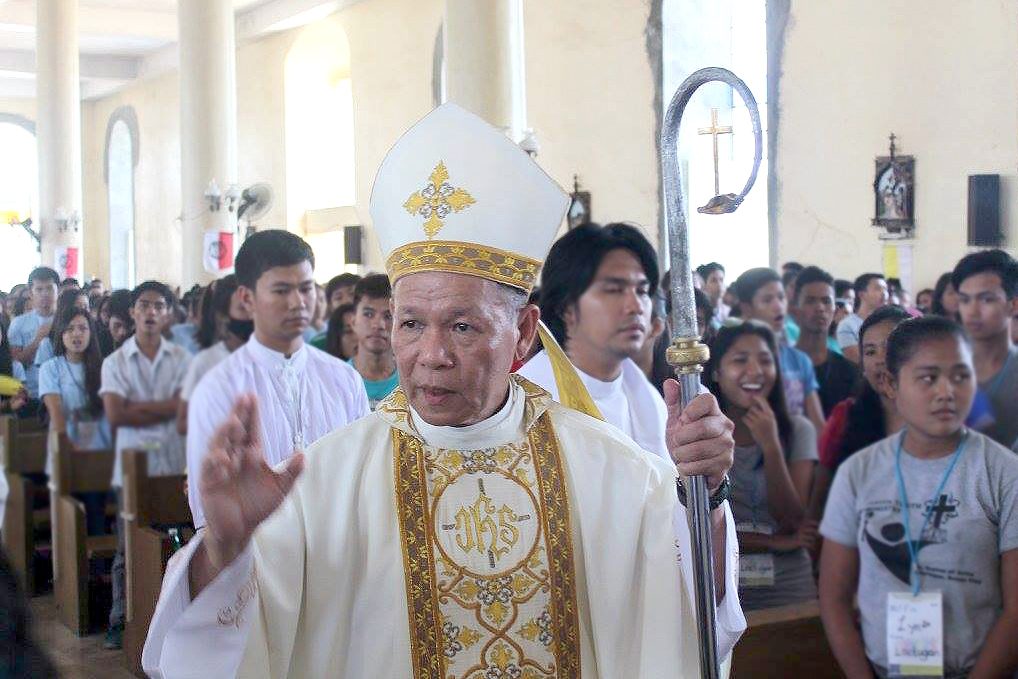 Cardinal Jose Advincula, 68, is the first prince of the Church from the Archdiocese of Capiz in the Philippines.

File photo from the Archdiocese of Capiz

Pope Francis on Saturday, November 28, formally made Capiz Archbishop Jose Advincula the 9th Filipino cardinal in history, breaking tradition as he picked the new prince of the Church from the “peripheries” of the Philippines.

The first pope from Latin America named Advincula, 68, the first cardinal from the Archdiocese of Capiz.

Francis formalized the new title of Advincula, along with 12 others, in a gathering of cardinals called a consistory in Vatican City. Advincula and another new cardinal – Bishop Cornelius Sim, the first cardinal from Brunei – however could not physically join the consistory due to the COVID-19 pandemic, limiting their participation to virtual means.

In Capiz at 11 pm on Saturday (Manila time), Advincula – who was wearing the amaranth red choir cassock worn by bishops during special ceremonies – watched the consistory via livestream.

Advincula will receive his red hat – worn only by cardinals, symbolizing their willingness to shed blood for the Church – on a still unspecified date in the Philippines. A representative of the Pope will give Advincula his red hat during this local ceremony.

The other new cardinals received their red hats on Saturday from the Pope himself.

Advincula’s new role is significant because, first, “cardinal” is the highest title a Catholic leader can get, next to “pope.” A cardinal advises the pope and, if below the age of 80, also gets to elect his successor. There are only 229 cardinals – including 128 electors of the next pope – in the 1.2-billion-strong Catholic Church.

Cardinals elect the pope from among themselves.

As of Saturday, two Filipinos – Advincula and Cardinal Luis Antonio Tagle, 63, now a top Vatican official and touted as one of the leading papal candidates – can vote when a papal election or conclave is convened.

The second reason why this is important goes beyond politics in the Vatican.

Raising the low-profile Advincula to the rank of cardinal shows Francis is serious about tending to the world’s “peripheries” – the poorest, most neglected parts of the world – and not getting stuck in traditional centers of power. Traditionally, Filipino cardinals came only from Manila and Cebu, bastions of the faith that vie for prominence in predominantly Catholic Philippines.

In fact since the first Filipino cardinal, Manila Archbishop Rufino Santos, was named in 1960, only archbishops of Manila and Cebu became princes of the Church – with the exception of Cardinal José T. Sánchez, a former archbishop of Nueva Segovia who later became a top Vatican official.

It is notable that since Francis became pope in March 2013, he has named only two Filipino cardinals – and both from the most unexpected places. The first Filipino cardinal he named, Orlando Quevedo, was archbishop of Cotabato – the first cardinal from Mindanao, the poorest island group in the Philippines.

‘Church has to be closer to people’

In an earlier interview with Vatican Radio, Advincula said, “Perhaps the Holy Father really wanted to communicate to the people in the peripheries that they are also being attended to by the Church.”

A priest had also told Advincula it might be because he established “mission stations” and “mission schools” in far-flung areas – first in the Diocese of San Carlos in Negros, then in the Archdiocese of Capiz. Born in Dumalag, Capiz, on March 30, 1952, Advincula was former bishop of San Carlos in Negros Occidental. He attended the Saint Pius X Seminary in Lawaan, Roxas City, and later studied theology at the University of Santo Tomas, a pontifical university in Manila.

Among those made cardinal on Saturday were Archbishop Wilton Gregory, the first African-American cardinal in the Catholic Church; Antoine Kambanda, the first cardinal from Rwanda; and Father Raniero Cantalamessa, preacher of the papal household, who requested not to be named a bishop before formally becoming cardinal, breaking tradition as he preferred to remain “a simple priest.” – Rappler.com