Carpio accepts Duterte challenge to debate, dares him to resign

Facebook Twitter Copy URL
Copied
(UPDATED) Duterte says he will resign if he's lying about Carpio having a hand in withdrawing Navy ships during Aquino's term. Carpio denies this and says 'Duterte should now resign.' 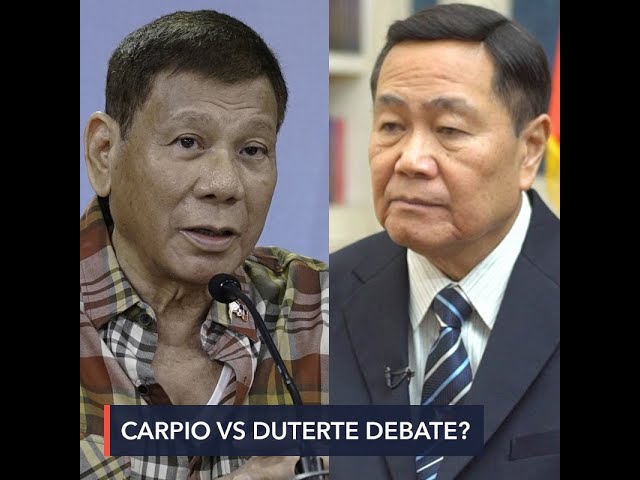 Retired Supreme Court justice Antonio Carpio is taking the verbal tussle with President Rodrigo Duterte to a new level – accepting the debate challenge of the President himself on the thorny issue of the West Philippine Sea.

“On President Duterte’s challenge to debate with me on the West Philippine Sea issue: I gladly accept the challenge anytime at the President’s convenience,” Carpio said in a statement sent to reporters on Thursday, May 6.

Carpio was once again the subject of Duterte’s wrath in the President’s late night speech on Wednesday, May 5.

It was in that same speech that Duterte belittled the historic Hague 2016 legal victory of the Philippines against China’s claims to its waters, implying that international law victories are only as good as paper that can be thrown in the trash bin.

Duterte also accused Carpio and former foreign affairs secretary Albert del Rosario of having a hand in the decision to withdraw Navy ships from the West Philippine Sea. Carpio and Del Rosario are key figures in the Philippine team that brought China to arbitration.

Duterte said he would resign if he’s proven to be lying.

(Now if I’m the one who’s lying, I will resign tomorrow, immediately. That’s what I can guarantee.)

Carpio said that as a sitting justice at the time, “all I knew about the withdrawal of Philippine Navy ships was what I read in the newspapers.”

“I state under oath that I was never involved in the decision to withdraw Philippine Navy ships from the West Philippine Sea during the 2012 Scarborough standoff,” said Carpio.

Philippine Bar Association (PBA) president Rico Domingo said they are willing to host the debate free and at no cost to either Carpio or Duterte.

“The Philippine Bar Association (PBA) offers to host this discussion on such date and time as the President and Justice Carpio may agree. As the oldest voluntary private organization of lawyers in the country, the PBA will provide a balanced arena fit for two lawyers of eminent stature and experience to dispassionately discuss the the core issues relating to the dispute on the West Philippine Sea,” said Domingo.

“The Filipino public will benefit immensely from a frank and straightforward discussion on a matter that affects the entire citizenry,” Domingo added.

The heated exchanges come amid mounting pressure on Duterte to take a stronger stance against the superpower country as Chinese ships swarm the Julian Felipe Reef, and a string of diplomatic protests, the latest being against “belligerent actions” by China against the Philippine Coast Guard (PCG).

Carpio, foremost authority on the territorial dispute with China, has lately been unrestrained with his tirades against China, and now, the President.

The retired justice had taken on the role as the face of 1Sambayan, an opposition coalition pushing to support candidates who can challenge Duterte’s bets in the 2022 elections.

Carpio accused Duterte of committing estafa and grand larceny for promising during the 2016 campaign that he would retake the West Philippine Sea.

Duterte now claims he never promised such, even though he was on television saying he’d jet ski to the Scarborough Shoal and plant the Philippine flag there. There’s also a record of his campaign team saying he was “fully supporting” the Hague case. – Rappler.com