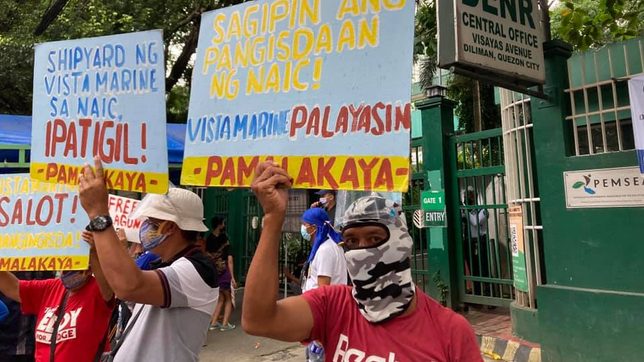 PROTEST Fisherfolk protest the Vista Marine shipyard operations in Naic, Cavite, in front of the DENR.

Fisherfolk from Naic, Cavite, are calling for the suspension of the operations of a shipyard operated by Vista Marine Shipbuilding and Shiprepair, Incorporated in the coastal barangay of Timalan Balsahan.

The community, led by Sonny Cuevas and Jaime Victoriano, said the shipyard’s sandblasting operations are a hazard to people’s health and the environment. They claimed that the use of propulsion of abrasive material to remove rust from ships disperses miniscule flecks into the air and sea, affecting residents’ health and their fish catch.

Cuevas and Victoriano met with the Department of Environment and Natural Resources (DENR) on Monday, October 18, to lodge their complaints.

DENR conducted an on-site investigation of the shipyard the next day, Tuesday. Vista Marine denied the environmental hazard of their operations and said they used a process called hydro-blasting, in which water is used instead of abrasives, so rust would not be dispersed into the air.

DENR ordered Vista Marine to install walls made from net and tarp to control the dispersion of rust during blasting operations.

Vista Marine denied this and told Rappler that the schedule of their blasting operations depends on the job order.

Disappointed with the outcome of their complaints, the fisherfolk, along with Pamalakaya. staged a protest in front of DENR Central Office at Visayas Avenue, Quezon City on Wednesday, October 20.

Cuevas told Rappler that fisherfolk in the community were disappointed when he informed them of DENR’S disposition.

(The residents do not think that DENR’s orders are the solution. It will only perpetuate our struggles, so the residents prefer the suspension of Vista Marine’s operations.)

Another part of the fisherfolk’s complaints is the unsanitary practices of the workers in the shipyard.

Fisherfolks claimed that ships docked in the shipyard have been discharging sewage into the sea. Catatmon told Rappler that they had experienced finding human feces in their catch before.

Vista Marine denied these allegations and said that they have toilets for their workers.

DENR ordered the firm to conduct a water sampling test to assess the quality of nearby waters. The community is encouraged to participate during the process.

Victoriano told Rappler that a water sampling test was not enough and suggested that a professional chemist should be present to help explain to them the process and results.

The community also complained that the improper docking of ships causes waves to bounce from the vessels to coastal houses, causing soil erosion.

Erlinda Dayo, a coastal resident, told Rappler that some of the ships were not docked in the shipyard, but on the coast. Waves bounce from the ships into the land causing damage to their house and eroding the soil the house is built on.

Allegations of soil erosion will need to be studied, according to the DENR.

A review will be done by the Mines and Geosciences Bureau in coordination with Vista Marine, which will finance the study. In order to avoid further complaints, DENR ordered Vista Marine to dock the ships properly.

Earlier calls for action by the community have failed. Catatmon said that they brought the issue to the mayor’s office in February where they met with then councilor and now mayoral aspirant Raffy Dualan.

Catatmon said Dualan told them to wait until March 15 so the local government could act on their concerns.

When no help came, residents traveled to Quezon City on March 16 to seek the help of the Department of the Interior and Local Government (DILG). They filed a petition signed by around 300 residents to suspend the operations of the shipyard.

Catatmon explained that residents were encouraged to join the petition when they learned about plans of a road-widening project in their area. The community suspected that the project was initiated to make the shipyard more accessible. Some of the signatories also came from an earlier petition initiated by other residents.

Catatmon said the petition reached a dead end when Barangay Captain Christopher Cabuhat refused to be part of it.– Rappler.com