NOBEL LAUREATE. The Catholic Bishops' Conference of the Philippines congratulates Rappler CEO Maria Ressa for her historic win in the 2021 Nobel Peace Prize.

Facebook Twitter Copy URL
Copied
‘This important recognition – the first for a Filipino – would hopefully strengthen our people’s conviction to build a nation where journalism is ‘free, at the service of truth, goodness and justice,’ the CBCP says

“This important recognition – the first for a Filipino – would hopefully strengthen our people’s conviction to build a nation where journalism is ‘free, at the service of truth, goodness and justice,’” the CBCP said in a statement, quoting Pope Francis’ tweet during the 2019 World Press Freedom Day. 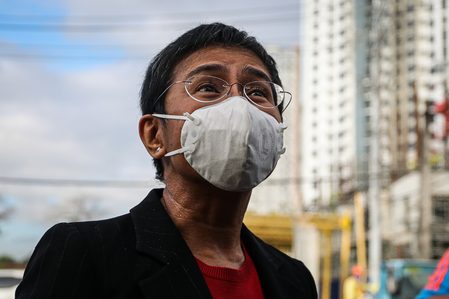 The CBCP is the grouping of Roman Catholic bishops in the Philippines. The CBCP primarily focuses on the formulation of pastoral policies and programs of the Catholic church in the country, which is predominantly Catholic.

On Friday, October 8, Ressa, along with Russian journalist Dmitry Muratov, were awarded the 2021 Nobel Peace Prize. According to the Nobel prize committee, the two veteran journalists won the prestigious award “for their efforts to safeguard freedom of expression, which is a precondition for democracy and lasting peace.”

In congratulating Ressa, the bishops’ group noted the struggles of journalists, especially amid the worsening disinformation.

“Today, all over the world, this journalistic work has become more and more difficult because of the level of disinformation and fake news that continue to spread through the means of social communications,” the CBCP said.

The CBCP also highlighted the role of the media in helping build a culture of dialogue.

“The vocation and mission, therefore, of the members of the Press (as envisioned by our Pope) is to contribute not only for the search for truth, but more importantly, to help build a culture of dialogue,” the bishops’ group added.

Ressa made history as the first Filipino to win the prestigious award since 1901. The Rappler CEO, in an interview with Reuters, said the award was “a global recognition of the journalist’s role in repairing, fixing our broken world”.

The 2021 Nobel Peace Prize will be presented on December 10, during the death anniversary of Alfred Nobel. The Swedish industrialist founded the awards in his will in 1895. – Rappler.com