Cebu City Mayor Edgar Labella was hospitalized for pneumonia once again, the mayor’s son Eugene told reporters in a statement on Tuesday, November 2.

“In response to questions from the media and people on social media, we confirm that Mayor Labella is currently admitted in a private hospital in Cebu City due to another episode of pneumonia,” Eugene said.

He addressed the media with his mother Joy and his brother Jaypee, at Cebu City Hall.

It was the first time the family had faced the local press to address the state of the mayor’s health since his illnesses began in January. 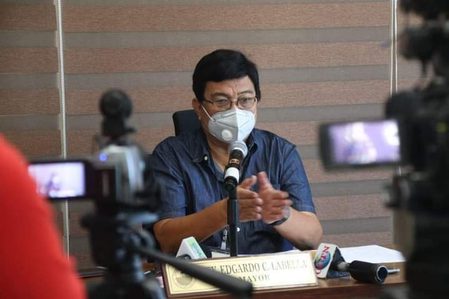 Labella had suffered from pneumonia several times in 2021, most recently last July. He has taken at least six leaves of absence in a year for health reasons.

He was first hospitalized for an ear infection in January which led to sepsis. According to Eugene, Labella “almost died” when he got sepsis at the time.

The pneumonia is not linked to COVID-19 and the mayor is fully vaccinated.

Eugene said the mayor was taken to the intensive care unit “a few days ago” because they suspected that the mayor had sepsis.

According to the United States’ Center for Disease Control, sepsis is the body’s “extreme response” to an infection and is a life-threatening medical emergency.

According to Eugene, the sepsis this time was mild.

Labella has been on indefinite leave since October 8 for his medical issues, while the vice mayor, Mike Rama, is the acting mayor.

During the press conference, Eugene also revealed his father had been diagnosed with prostate cancer about 12 years ago.

“But he was duly operated on and treated that time,” Eugene said. “He was already cleared [and] his cancer [was] already under control.”

He pointed out how when his father decided to run for mayor in 2019 “he was in great shape” but that his health had suffered as the first-term mayor had to deal with a pandemic less than a year after his administration started.

“He worked nonstop to oversee and make sure that the city is able to efficiently carry out its COVID response and recovery effort – to the point that his own health took a back seat,” the mayor’s son said.

Eugene said his doctors have been monitoring the mayor’s prostate-specific antigen levels and said doctors told them the cancer was “manageable.”

With Labella’s term about to expire in May 2022, Labella’s other son Jaypee said that his father intends to complete his term, but does not intend to run for office again in the near future.

“Immediate family would always support him,” he added.

While Edgar will no longer run, Jaypee filed his certificate of candidacy (COC) in October for city councilor under Mike Rama’s slate.