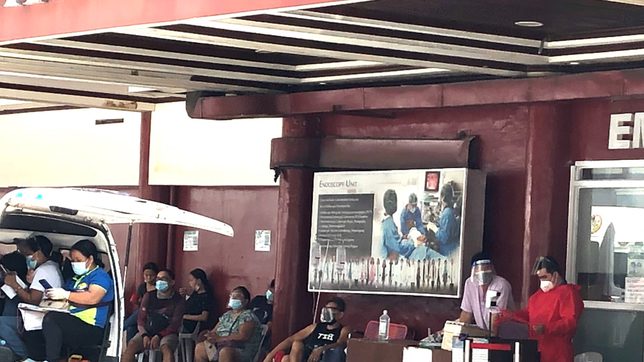 (As for the number of beds available, there are vacant beds. There are 443 available beds. The question is if we have enough personnel.)

According to Garganera, the city’s hospital occupancy rate stands at 57%. This is just a tad below the 60% critical occupancy threshold.

Cebu City was placed under modified enhanced community quarantine until August 15. At least 32 cases of the Delta variant were discovered in Cebu.

It has also been topping the list of cities in the Philippines reporting triple digit daily new COVID-19 cases over the past two weeks.

While local health officials have not directly blamed the delta variant for the surge in cases, at least 32 have tested positive for the highly contagious mutation of the coronavirus.

Despite the statistics, long lines of ambulances have become a constant sight in Chong Hua Hospital, a major private hospital in the city.

More recently, the situation has worsened as patients themselves started queuing outside the hospital’s emergency room, waiting to get admitted.

Acting city mayor Michael Rama, after a call with Chong Hua management, said the hospital also had enough beds but lacked personnel, making it a microcosm of the healthcare dilemma in the city.

The acting mayor is set to meet with hospital owners on Monday.

In a separate press conference on Monday, August 2, Dr Jaime Bernadas, Department of Health Central Visayas director, said another part of the problem is patients going to Chong Hua Hospital, one of the most-popular hospitals in Cebu, when there are vacancies in other hospitals.

“We encourage people to call DOH-7 or the EOC and coordinate if they need to be admitted so we can direct them to the hospital with vacancies,” Bernadas said.

Garganera said the Department of Health (DOH) sent additional medical personnel to augment the shortage in the city, but a bulk of them eventually resigned.

(DOH downloaded personnel in the city but we encountered problems. There were those who showed up for duty but sort of resigned after. Those who were here before also resigned for travel abroad.)

Right now, DOH is working hand-in-hand with the Vicente Sotto Medical Center (VSMMC) to solve the medical personnel crisis in the city.

Rama also said the city is scouring its coffers for budgeting purposes, for when reinforcements do start coming in.

On Sunday, August 1, the city recorded a record-high of 413 new cases of COVID-19. Cebu City’s positivity rate stands at 20.7%– way above the 5% threshold for areas with manageable cases by the World Health Organization.