Facebook Twitter Copy URL
Copied
(1st UPDATE) Despite this, the city government won't realign the budget for other things, anticipating a need to still purchase vaccines until herd immunity is achieved

After Cebu City initially set aside over P400 million for vaccines, the tripartite deals to purchase them won’t push through after all, Vice Mayor Michael Rama told Rappler on Friday, May 21.

“According to Harry Roque, the focus of all these COVAX will be hitting Metro Manila, Cebu, and Davao. We will be flooded by vaccines,” Rama said.

While Rama, who is in charge of the vaccine rollout, previously said the vaccines budget would be realigned, Mayor Edgar Labella later said the city would keep the funds in reserve just in case they would need to buy vaccines later.

“Despite this, we won’t use or realign the budget for other things which the government has allocated for the purchase of our own vaccine supply. We are doing this to ensure that there will be no oversupply and waste of vaccine doses,” Labella said in a statement on Friday, May 28.

“If we realign it right away, there is a possibility that we won’t have any funds to use when the intended need arises,” he added.

Labella said he prefers to realign the budget only if it’s still there by the time the city reaches “herd immunity.”

Rappler reached out to Labella on Monday, May 31, to ask about the vaccine budget, but he could not be reached as of this posting.

The money was going to be sourced from the city’s most valuable piece of real estate, the South Road Properties project, a business and residential development on the south side of the city. The city started its vaccination program in March.

So far, about 43,747 residents have received their first dose, while 57,738 received their second dose already, according to the latest data available from the Department of Health Central Visayas on May 18.

While the city called its vaccination program a “storm rollout plan,” it’s been more akin to a drizzle.

Even as Cebu City is considered a priority area, it still had to stop its vaccination of senior citizens on April 26 for a week due to lack of supply. 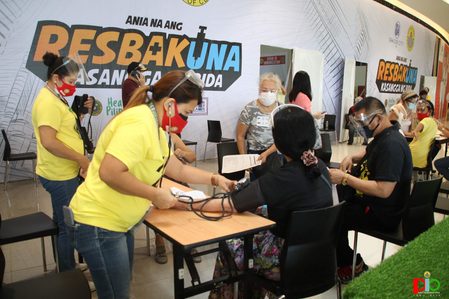 However, city officials are confident the stream of vaccines will be enough to accelerate vaccinations in the coming months.

“The prospect of [an] influx of many vaccines is not perfect but is coming to a reality,” Rama said.

As of May 20, Cebu City’s active coronavirus cases dropped to below 386, continuing the downtrend in cases after a prolonged surge from January to March.

The Department of Health encouraged residents to get inoculated while the cases are low to avoid any variants of concern emerging in the Cebu area.

Cebu was once considered a “second epicenter” in the coronavirus outbreak after Metro Manila.

The government plans on vaccinating residents under the A4 category – which include government non-medical frontliners and non-government/private sector workers by the end of May or early June.

The available vaccine brands in Cebu are Sinovac, AstraZeneca, and a small volume of Pfizer vaccines, all from the COVAX allocation.

Cebu City residents can pre-register for their vaccine appointments at pabakunata.com – with a report from John Sitchon/Rappler.com