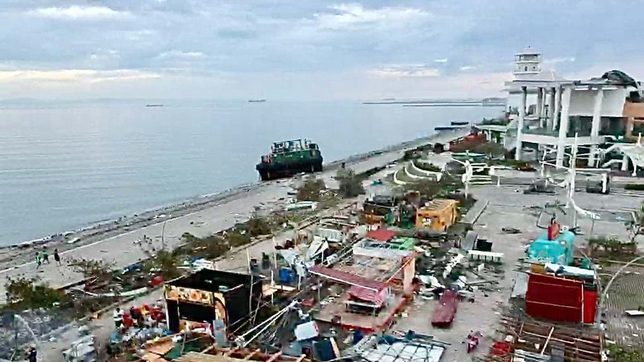 Damages to infrastructures and utilities in the aftermath of Typhoon Odette in Cebu City on December 18, 2021. Jacqueline Hernandez/Rappler

Rama announced this in a press conference on Friday night, December 17. The order was prompted by what the city government called the “most devastating” typhoon to hit the city in the last 30 years.

“This is a directive signed by the Mayor, 12-17-2021-01 from the Office of the Mayor to Task Force Puyo, PNP, and Cebu City. This subject matter is an order declaring a citywide general State of Calamity and Emergency, providing rules and guidelines thereto,” the order read.

The declation provides for a mandatory stay-at-home order while the city is under a state of calamity and emergency. Under the declaration, all residents must stay home except for the following:

The city government said those who violate the order would be asked to return to their homes.

Rama said in a press conference on Friday that the stay-at-home order is to prevent the hampering of rescue, retrieval, relief and road-clearing operations.

As of Friday night, December 17, the city estimated that 15,000 residents were in evacuation centers. Rama said that aside from food and water provisions, he wanted evacuees to be provided with social and psychological services for those experiencing trauma due to the typhoon.

The mayor called on the national government to “pressure” power and water suppliers to restore electricity and water as soon as possible.

As of Friday evening, Cebu City power supplier Visayan Electric said they did not have an estimated time of restoration due to ongoing clearing operations.

The Department of Energy had earlier assured residents of Odette-affected areas of restored power by Christmas.

Ponce said that aside from power restoration, the priorities of the city are getting ATM machines back online, as well as the resumption of remittance services.

“People need to access funds from bank accounts in order to rebuild their lives. Critical areas of concerns are ATMs, remittances and elsewhere,” Ponce said.  “I, myself, have no way to access my money.”

City officials urged the Department of Trade and Industry to keep unscrupulous traders from taking advantage of the situation.

Cebu Governor Gwen Garcia had placed cities and towns under its jurisdiction under a state of calamity on Saturday afternoon.

No arrests but sanctions possible

In his press conference on Saturday, December 18, Rama said that while violators of the stay-at-home order would not be arrested, they may still face sanctions.

He urged critics of the order to read the guidelines first before complaining, especially the exemptions to the rule, including leaving one’s home for medical purposes.

Leaving one’s home other than for essential tasks appear to be appear to be the the last thing on Cebuanos’ minds. For two days now, most of Cebu City’s water supply remained cut off, causing long queues in water stations for potable water. Some residents have resorted to boiling tap water for drinking but this cannot be sustained without a steady water supply.

When asked about this, Rama said that the national government was aware of the situation.

He said Cebu City Councilor Joy Young will conduct a command meeting on the water situation and will report to him on Saturday afternoon.

Residents are also struggling due to the power situation. Rama said, however, that while waiting for the National Grid Corporation of the Philippines, the Visayan Electric Company committed to “energizing” their substation at Barangay Ermita. The Department of Energy also earlier said it would try to restore power in all affected areas by Christmas. – Rappler.com