“We will first distribute cash assistance to the fully vaccinated. To all fully vaccinated senior citizens, take your financial assistance ahead. The partially vaccinated would be next,” Rama told seniors in a mix of Cebuano and English during his induction speech at Plaza Sugbo, Cebu City on Monday, December 6.

Senior citizens usually get P3,000 in assistance from the city in the first and fourth quarters annually.

The city will suspend distribution of the cash cards in the meantime to have time to assess who will get priority based on vaccination status.

“We will suspend, in the meantime, those needed cash cards. Suspension of cash cards [will be done] and we will bring all of them to the gym,” Rama said.

They will resume distribution before December 18.

While unvaccinated seniors would still get their cash assistance, they would get these at a later time.

The move is part of the city’s efforts to compel those who are still unvaccinated against COVID-19 to get their jabs.

As of Monday, December 6, local health officials reported that they have already inoculated 92% of the 719,000 eligible population in the city or 660,000 residents.

The city government expects to raise its fully vaccinated population before the end of the year. Prior to the last “National Vaccination Days,” the city’s fully vaccinated rate hovered at 50% for several weeks.

Meanwhile, Rappler reached out to the Office of the Senior Citizens Affairs (OSCA) for its comment on Rama’s recent move but has yet to receive their response as of posting. 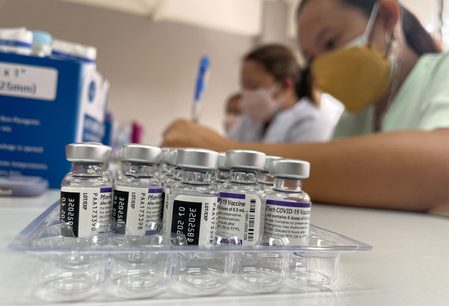 Eight months since its rollout, the vaccination turnout of city elders has been relatively low.

According to the city government’s data, only 41% of about 80,000 senior citizens have received their first dose of the COVID-19 vaccine.

This means the remaining 59% of the elderly population are unvaccinated.

To help seniors get the vaccines, he said that they would introduce a vaccination-at-home drive.

“When you do the vaccination at their homes, you’d be hitting five birds with one stone. You’d discover that other family members of these seniors are unvaccinated too,” Rama said.

According to the city’s COVID-19 emergency operations center, the city only has 42 active cases left. It has also recorded a positivity rate of less than 5% since October 29. Hospitalizations are also down with 29% of COVID-19 beds occupied in both public and private hospitals in Cebu City. – Rappler.com