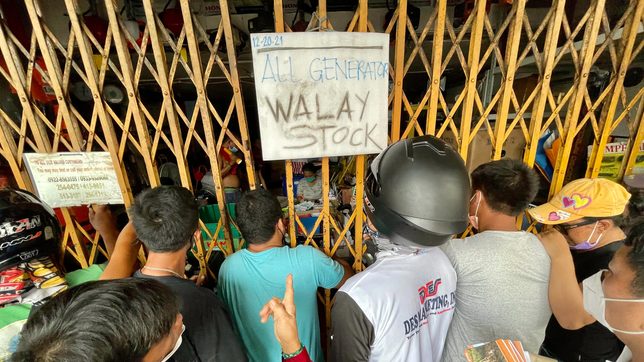 WHERE TO GET POWER. With power supply still down, residentsu00a0of Cebu are desperate to buy generators in Carbon Market following the onslaught of Typhoon Odette on December 22.

CEBU CITY, Philippines – The Cebu provincial government has warned it would issue cease-and-desist orders against gas stations that defy a price-freeze order on fuel.

The order remains in effect until the state-of-calamity declaration is lifted in the province.

Cebu Governor Gwendolyn Garcia reiterated the measure in Executive Order No. 50-A which she signed on Wednesday, December 22.

Fuel scarcity following the onslaught of Typhoon Odette late last week has resulted in long and uncontrolled queues of motorists at gas stations, causing heavy vehicular traffic across the province.

Garcia said the fuel-price freeze would remain in effect during the entire state-of-calamity period in Cebu province. Erring fuel dealers would face sanctions.

No different from residents in most parts of the island adversely affected by Odette’s onslaught, many Cebu province locals have been relying on fuel for power generators to light up their homes and workplaces.

Gas stations are not an exception because they also rely on generator sets to make their pumps function. Several gas stations temporarily closed down because of the damage caused by the typhoon. – Rappler.com