An aerial photo of Cebu

The Commission on Audit (COA) said the local government units must investigate the releases and send demand letters to recipients, asking them to refund the entire amount.

Local government officials, however, said in their replies to the audit observations that they were given too short a time to complete the financial assistance distribution and barely any time to validate the names.

They said the guidelines for the distribution came late. Many of the LGUs were also reluctant to send demand letters to the recipients.

Topping the list of cash assistance releases flagged as ineligible was Mandaue City.

Of Cebu’s 44 towns and nine cities, 39 were flagged as having released cash assistance to ineligible beneficiaries. 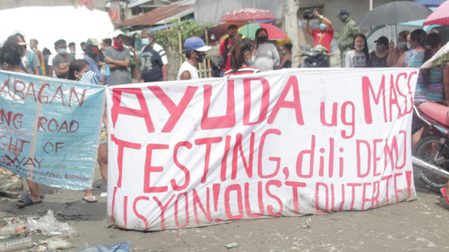 COA said in its annual audit report published on the government agency’s website that Mandaue City released P34.96 million to 5,827 ineligible beneficiaries. The city received P334.65 million in cash aid for distribution in its 27 barangays.

Mandaue City officials told auditors in their reply to the audit observation memorandum (AOM) that they chose the cash assistance beneficiaries by making use of an existing database of people that was compiled for a different purpose.

When they gathered more information, Mandaue officials said they relied mainly on information supplied by intended beneficiaries to the barangays.

They told auditors that targeting beneficiaries using the Department of Social Welfare and Development (DSWD) Memorandum Circular No. 9, which defined the guidelines for cash aid releases, was “near impossible to implement.”

“The barangay and in turn, the City of Mandaue, have no way of ensuring that the beneficiaries do not belong in the excluded list, other than the word of the beneficiary,” they told auditors.

Mandaue City officials also said that if the beneficiaries were indeed ineligible, the demand for a refund should be “initiated and facilitated by the DSWD, and not by the City, and only after investigation was concluded against their ineligibility.”

COA, however, said in its rejoinder that Mandaue City should investigate the release and require ineligible beneficiaries to return the amount and then turn this over to the DSWD.

Next to Mandaue City in the rank of ineligible cash aid releases was Talisay City.

COA said Talisay officials agreed to a revalidation of the beneficiaries. Auditors also said the P840,000 that was returned by ineligible beneficiaries was, at the time of the audit, still not turned over to DSWD “depriving the DSWD to make use of the unremitted fund in the implementation of its other social welfare programs.”

Daanbantayan said it downloaded its cash assistnce funds amounting to P34.45 million on April 20, 2020 for distribution to residents in their 20 barangays.

The funds were withdrawn on April 23 then distributed to the beneficiaries from April 24 to April 30.

“The DSWD advisory regarding the guidelines for the distribution of SAP was issued only on May 5, 2020, in which case, distribution was already completed,” Daanbantayan told auditors.

Daanbantayan said it would not write demand letters to these beneficiaries, saying such a prevalent problem should be addressed regionwide.

COA said in its recommendation that Daanbantayan should ask the DSWD Central Visayas to resolve the issue “otherwise refund shall be accrued to the persons responsible for certifying these individuals.”

Many other local governments also expressed concern with going after the beneficiaries and demanding that they return the full amount.

Cebu City, which COA said released P3.79 million to 632 ineligible beneficiaries, “expressed their confusion and bafflement as to why they were the ones to send demand letters for the return of received cash aid benefits when their participation in the cash assistance distribution was merely to encode the data gathered and submitted.”

COA said this justification is “unmeritorious” and denied the city’s request for relief from responsibility of demanding refund from ineligible recipients.

Badian town, which was flagged for releasing P3.92 million to 653 ineligible beneficiaries, said DSWD gave them only 10 days to complete the distribution, not enough time to validate the list.

The municipality also told auditors that Municipal Social Welfare and Development (MSWD) staff were harassed by people insisting that they were qualified.

The town also said that DSWD did not orient its staff on provisions of the guidelines and it had to go by what it understood upon reading it.

MSWD Officer Arlene Lucero told auditors she was reluctant to send demand letters to the ineligible beneficiaries because of the harassment she and her staff experienced in person and on social media.

COA, however, said in its recommendation that the town should send demand letters asking the ineligible beneficiaries to refund the entire amount and turn this over to the DSWD.

Lapu-Lapu City was told to process the turnover of P638,000 in “unexpended balance” of cash help and liquidate the P452,000 in cash advances to a disbursing officer for the cash aid distribution. The city accepted the recommendations and said it would implement these.

Danao City, on the other hand, was told that the financial assistance to beneficiaries in 23 barangays totaling P41.87 million “were processed and paid without complete documentation.”

The city said the papers were complete only that the documents DSWD required for the second tranche were attached to the first payout. The city accountant assured auditors they would immediately submit the papers. – Rappler.com