As COVID-19 continues to affect the lives of people globally, Cebuano physicians from the University of Cebu School of Medicine (UCMed) say the pandemic was a major setback for newly-licensed doctors.

In a Rappler Talk interview aired on Monday, May 3, Dr. Bernadette Awit said she initially had her internship in Manila postponed after passing the Physician licensure exams in March.

“It feels like a major setback. I was already planning to go into residency right away after the board exam but because of the pandemic, from Manila, I had to go home to Misamis Occidental instead,” she said.

Rappler Talk: Cebu physicians on starting their careers during a pandemic 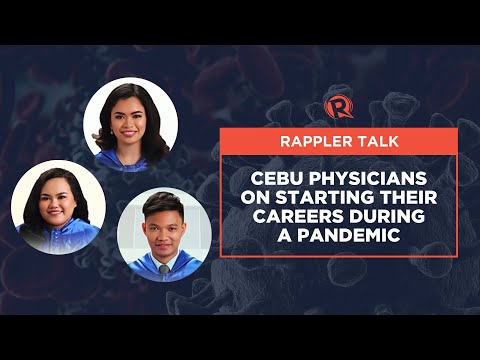 According to Awit, her family asked her to return home as they believed it was safer for her to be with them. During this time, the cases in Cebu City had just encountered a huge spike.

“There’s this desire to start residency but then because of COVID-19 and the changes that were uncontrollable, I had to readjust everything,” she added.

In the same interview, Dr. Gay Sheila Calog and Dr. European Henly Sanchez said they felt “held back” by the pandemic.

“Our internship was cut-off by March of 2020 so we weren’t able to go to the hospitals to do our internships. It felt weird being stuck at home but we also thought this was an opportunity to study for our board exam,” said Calog.

“It came to a point where we badly wanted to help but we couldn’t because we were stuck in our homes,” said Sanchez.

According to Sanchez, it was not an “easy ride” because the newly-licensed doctors needed to face difficulties with the virtual set-up brought out by the pandemic, while also facing old problems involving the physician’s job.

Calog also mentioned that despite wanting to immediately take up residency, like her peers, she needed to consider the welfare of her family first before making any decision relative to her situation

Despite this, the doctors believe that the calling to become a doctor is much needed now in the pandemic.

Preparing for the board exams

“We already started to prepare for the review season so we applied to review centers and in my case, I was planning to do my review in Manila,” said Calog.

When COVID-19 arrived, Calog explained that plans for reviews entered a “state of limbo” and were then changed to a more virtual alternative. She said that, despite wanting to have a physical class set-up, she had her board reviews via video-conferencing platforms instead.

Awit shared that the shift to online board reviews was difficult for her and her colleagues.

“Doing it online did not make it any easier… it’s difficult to study by yourself online and even more difficult to reassure yourself when you’re in the middle of COVID-19,” Awit said.

She recalls having to cut off from social media as much as possible to stay focused during the review. Awit added her mother would join her for online mass to pray for the upcoming board exam.

Despite the challenges, Sanchez emphasized how passing the boards in a pandemic was in and of itself, a worthwhile achievement.

“Even during that time where there was an earthquake going on, there was a storm going on, we had to face all of that to take the board exams, to get our licenses, and to finally be where we are right now,” he said.

The Cebu physicians said that they are hoping that aspiring students would still pursue being a doctor in the pandemic as according to them, “having new doctors is needed now more than ever”.

“It’s okay to doubt and fear once in a while but don’t let these cripple you. Know that the Lord has placed that desire to be a doctor in your heart, and He will see you through,” said Awit.

“The country needs you. Use that as a motivation to serve your fellow man,” concluded Sanchez. – Rappler.com