The graphic was posted Monday afternoon but has since been taken down.

The poster warned residents "not to be fooled" by the Kabataan Party list, a part of the progressive Makabayan bloc in the House of Representatives.

(What were once complete and happy families have now been destroyed by Kabataan Party list CPPA NPA NDF.)

The online poster, apart from a cropped photo of Elago, also showed old family pictures of minors tagged as members of rebel groups.

The post was taken down a few hours after it was posted on the official CPPO social media account.

Rappler also reached out to Elago for comment, but she has not yet responded as of this posting.

Earlier in July, Elago asked the National Bureau of Investigation to look into at least 30 other similar posts tagging her and her party-list group as recruiters for the New People’s Army. 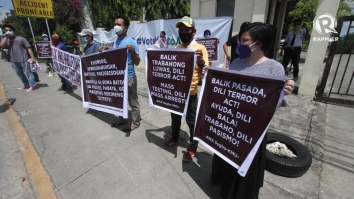 SONA PROTEST IN MANDAUE. Bayan Central Visayas along with Piston held a protest against the State of the Nation Address of President Rodrigo Duterte and the Anti-Terror Act in Barangay Jagobiao, Mandaue City on July 27, 2020.

Also on Monday, the Cebu provincial police dispersed a cultural presentation by Kilusang Magbubukid ng Pilipinas (KMP) as part of the simultaneous #WakaSONA protests in the island.

Scenes of the interruption were caught live on the BAYAN Central Visayas Facebook page. This took place in Bonbon, Aloguinsan, 59 kilometers southwest of Cebu City.

In the video, farmers were in mid-dance when police officers stepped in and stopped them from continuing with their protest performance further.

During the short negotiation between the farmers and the police, the camera panned to intelligence officers in civilian clothes who were taking photos of the performers.

In an interview with Rappler, Staff Sergeant Marvin Hubahib of the Aloguinsan Municipal Police Office clarified that no arrests were made after the dispersal.

(No one was arrested earlier. We just warned them, we dispersed them.)

When asked by Rappler, Aloguinsan police did not name what law did the farmers’ group violate that called for police intervention.

Mariano, said, however, protests can be dispersed if groups did not have permits.

"Wala pang report sa akin. Kasi, if they have no permit, I think dapat talaga i-disperse sila," he said.

(I have received no reports yet. If they have no permit, I think it's right to disperse them.)

Despite this, the rest of the protesting groups and speakers continued on with the livestream.

This included the protest action conducted by AMA Sugbo KMU and BAYAN Central Visayas in front of the ABS-CBN Region 7 compound in Jagobiao, Mandaue City.

Different sectoral groups in Cebu called on the the Duterte administration to prioritize healthcare in response to the pandemic, to uphold press freedom and to junk the Anti-Terror Law.

They also demand the return of Elena Tijamo, a program coordinator of Farmers Development Center, who was captured by unidentified armed men last June 13. – Rappler.com