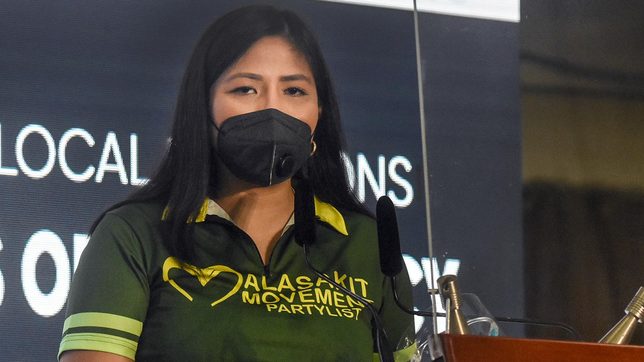 PARTY LIST RACE. Former MMDA spokesperson Celine Pialago speaks to the media after filing the CONA of Malasakit party-list for the May 2022 elections at the SOfitel hotel in Pasay City on October 6, 2021.

Malasakit Movement Party List submitted its certificate of nomination and acceptance on Wednesday, October 6, with the Commission on Elections, with Pialago as its first nominee.

In her speech, Pialago said that the party wants to push for better benefits for barangay councilors, tanods (village watchmen), and health workers. The people Pialago wants to represent, however, are part of the barangay government – the smallest political unit in the Philippines.

She said that the Malasakit Movement Party List has 10 nominees from different sectors.

The Malasakit Movement appears to ride on Senator Bong Go’s pet project Malasakit Centers, even using the senator’s political color, shade of green, when he ran for senator.

Early in 2021, election lawyer Emil Marañon said that Pialago filed for the registration of the new party list. Asked about this, Pialago at the time told Rappler that she “did not file.”

Aside from being the face of MMDA, Pialago was also appointed as one of the spokespersons for the National Task Force to End Local Communist Armed Conflict (NTF-ELCAC).

On Wednesday, Pialago was asked if she would be willing to work with the Makabayan bloc should she get a seat in Congress, knowing that the said bloc is against NTF-ELCAC.

Pialago did not answer the question directy. She instead said that the NTF-ELCAC’s vision is a good initiative to begin with.

(If NTF-ELCAC’s vision is good – and what it started is really good – I am willing to work with NTF-ELCAC. I could be its voice in Congress.)

Pialago has been linked to several controversies, stemming from her infamous lines and seemingly confusing statements.

Pialago became a media sensation for incorrectly saying that a Miss Philippines Earth contestant “passed away.” She was an RPN9 reporter and PTV4 anchor.

She was a media relations officer at the Department of the Interior and Local Government, until she was appointed spokesperson of the MMDA in 2016. Pialago was later appointed as assistant secretary at the MMDA.

In 2020, Pialago was under fire for calling the plight of detained activist Reina Mae Nasino, whose daughter River died at three months old, a “drama serye (series).”

Pialago was also involved in an ugly word war with ABS-CBN reporter Doris Bigornia whom she called a “devil.” Bigornia’s report, which called out Pialago for giving the media incomplete information, led the ex-MMDA spokesperson to file a cyber libel complaint against the ABS-CBN reporter. – Rappler.com